Memorial of the Morses 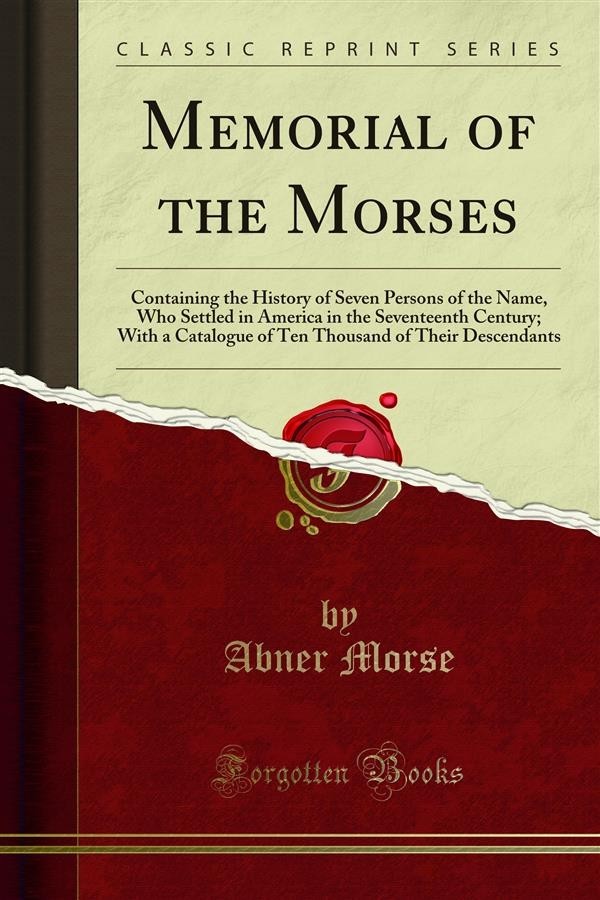 Memorial of the Morses

To all patrons of this work, inquisitive to know the origin and antiquity of the name of Morse, the subscriber would respectfully observe that the results of a partial investigation favor belief in a Norman origin of very high antiqui ty. Complete certainty may yet be attained. Different modes of spelling names which have in this country been considered as identical, have prevailed in England for four hundred years, denoting distinct names. The want of uni formity in the orthography of our ancient records, and in the signatures of members of the same family, has embarrassed him in determining the origi nal transatlantic mode of spelling some of the names heading the following catalogue. None but the race of Samuel are ascertained to have observed uniformity. As he stands recorded Morse in England, so he and his have ever since written their names. In the autograph of Joseph, the same Spelling is preserved; but his son John, an excellent clerk, wrote his own name Morsse, and the names of his nephews, uniformly Morss. Others of this family adopt ed a fourth mode of spelling. Anthony and William, at the time of their embarkation, were registered Morss; and this manner of spelling was adopted by a part of their descend ants, while another part uniformly signed their names Morse. The autographs of Anthony, sen., and of his brothers, William and Robert, still preserved, are spelt Morse. The former mode, however, was from the first generally observed in Town and Church records: and all the confusion may be attributed to clerks who led one another astray, and finally some of the race; and perhaps to draftsmen, who by misspelling the name in wills and deeds, created a necessity for its adoption to secure property. John of New Haven, and the four first generations of his race, signed their names Moss and a highly respected part of his descendants have retained this spelling to the present day; while others have exchanged Moss for the more common name of Morse. It appears then that the families here traced, have derived their cognomen from two distinct names in Europe.