A Glossary of Judicial and Revenue Terms, and of Useful Words Occurring in Official Documents Relating to the Administration of 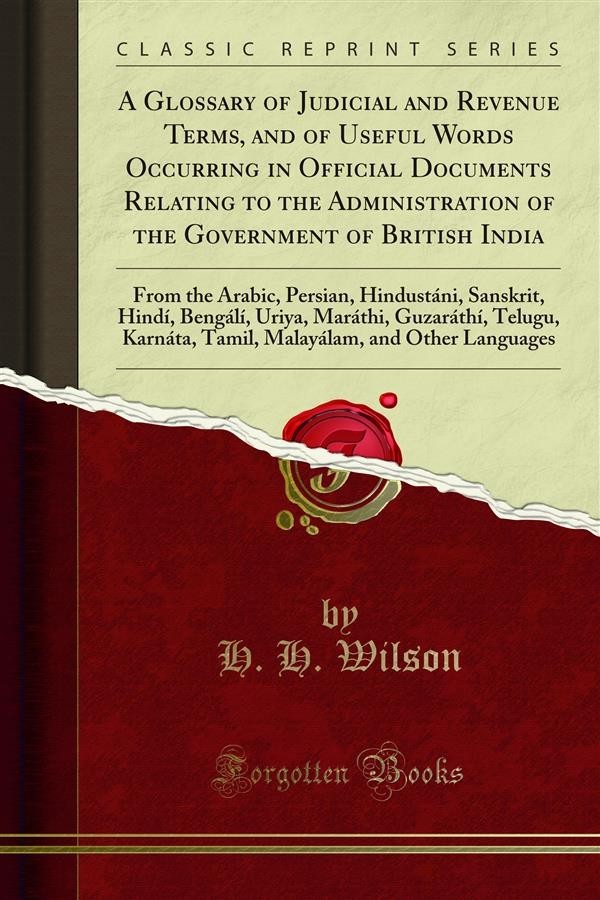 A Glossary of Judicial and Revenue Terms, and of Useful Words Occurring in Official Documents Relating to the Administration of

Copious as were the materials furnished by these different sources, it was very soon evident that the supply was far from exhausted, and that a great number of words employed in official documents still remained to be collected and explained. Public documents respecting the judicial and revenue and other departments of the administration of India have of late years been communicated to the public through the press with a liberality which, although no doubt in many respects of great public utility, might perhaps be now curtailed with advantage, as the voluminous extent of the publications may appal some who would wish to consult them, and deter them from availing themselves of the information. Thus we have in print Monthly Reports of Cases decided in the Sadr Courts of Appeal at Calcutta, Agra, Madras, and Bombay Monthly Reports of the Cases decided in the Zila and subordinate Courts of Bengal, the N orth-west Provinces, and Madras, which have come latterly to average about 500 pages each, or 6000 pages per annum, or, altogether, octavo pages annually. Besides these, the Settlement Reports of the Revenue Officers of the North-west Provinces have been printed, and, at all the Presidencies, Extracts from the Records for many years past have been published, or are in course of publication. All these documents abound more or less with native terms, which, if not in all instances strictly technical, are treated as officially current, and are therefore in need of interpretation. All these have been gone over for several years past, from 1846 to 1853, and such words as were not previously included have been added to the compilation.