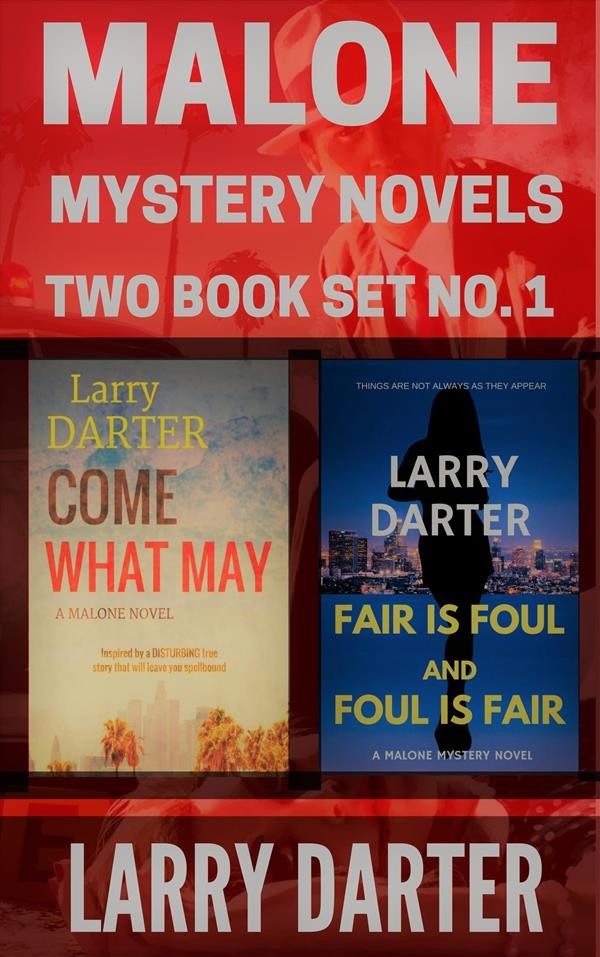 Ben Malone is a modern-day Los Angeles private eye in the mold of Chinatown's Jake Gittes and Raymond Chandler's Philip Marlowe, a street-wise, smart-mouthed tough guy with a heart of gold. Two Book Set No. 1 consists of the first two books in the series, "Come What May" and "Fair Is Foul, and Foul Is Fair." These two novels have an average reader review rating of 4.8 and 4.2 stars, respectively. We hope you enjoy these first two installments in the Malone Mystery Novels series and thank you for reading!

Come What May chronicles Malone's last case as an LAPD homicide detective. It's a tale of deceit, betrayal, dark choices, and murder that reviewers describe as "gripping," ”full of suspense and thrills," and "hard to put down." Inspired by a shocking true story, Come What May is a high-stakes thrill ride through the gritty underbelly of the City of Angels and a look at the darker side of human nature.

Ben Malone is a veteran Los Angeles Police detective with a bright future ahead of him. Or so he thought until he is caught up in a run of bad luck and his life starts falling apart. The worst of it, his unfortunate entanglement in a spate of fatal on-duty shootings at a time when activists are protesting the use of deadly force by police and rioting all over the country. On edge and questioning his judgment, Malone's LAPD superiors speculate that he may be too quick to use deadly force. Relieved from street duty, Malone is sequestered in Robbery-Homicide Division's Cold Case Homicide Section to keep him under wraps while he undergoes department-mandated psychiatric evaluation. But, Malone and new partner, Detective Jaime Reyes, come across the files of a cold as ice, 23-year-old unsolved murder case. The more they study the case, the more certain they become that the theory pursued by the original investigators was completely wrong.

Since the decades-old murder does not fit the unit's criteria for reopening a cold case for active investigation, Malone and Reyes embark on an "off-the-books" investigation. Predictably, that creates some problems, especially for Malone. It quickly becomes clear that there are powerful forces at work both inside and outside the LAPD determined to keep the truth behind the murder buried along with the corpse. The more resistance he encounters, the more unwavering Malone becomes in his unwillingness to let sleeping dogs lie, even when things start to get increasingly personal. His persistence in digging up bones from the past begins to threaten his very career with the LAPD. Even when the investigation sends him hurtling into more trouble than he ever dreamed possible, Malone is unrelenting. He is determined to solve the mystery and to uncover the truth behind the brutal 23-year-old unsolved murder, come what may.

Fair Is Foul and Foul Is Fair

A gorgeous socialite. A maverick investigator. A deadly connection. When a drop-dead gorgeous socialite with a wad of cash walks into Ben Malone’s office with a sordid tale to tell, he does what any self-respecting private investigator with rent to pay would do – he takes the case. But soon, he realizes he may have bitten off more than he can chew. As the body count rises and all signs point to the Ukrainian mob, it becomes increasingly clear that there’s far more at stake than his client’s needs. This mind-boggling case just might hit too close to home for him, and he has no intention of letting it get any worse. The clock is ticking. Lives are on the line. Will Malone stop this runaway train of destruction and untangle the web of criminal wrongdoing in time, or die trying?