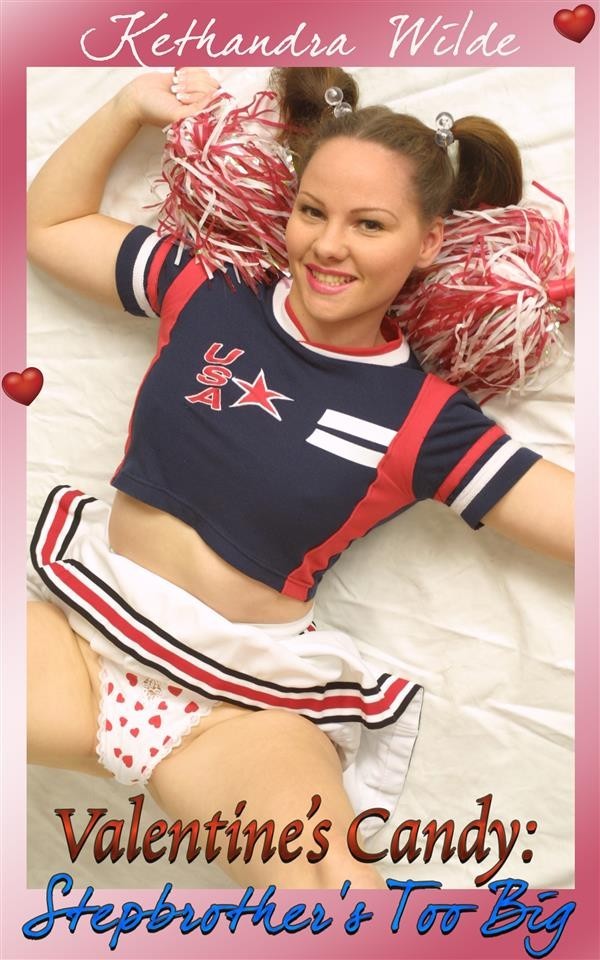 Very well-endowed Valentine is home from school. A coach's young wife and his own exotic "aunt" have taken advantage of his size for their own pleasure, giving him more sexual experience than most boys his age. Now his stepsister Candy, still a virgin at 18, has grown curious about sex.

"Would you like to?" He repeated his earlier question, though the meaning had changed. She blushed bright red, realizing what he was asking. She found herself unable to answer, except for the unconscious parting of her soft lips.

Valentine leaned in and gently pressed his lips to hers. The sensation on her lips was so tender that she didn't tense up at all. She felt a sense of loss when he pulled back, but that vanished when he renewed the kiss, catching her full upper lip between both of his.

She made a soft cooing sound before pressing toward him, kissing him back. Knowing her past experience, he only brushed the soft tip of his tongue along the lower edge of her luscious upper lip.

She giggled. He withdrew from the kiss, but stayed close enough to lightly rub the tip of his nose along her cute little upturned one.

His voice sounded like it came from deep in his chest as he whispered, "What?"

The hand holding her chin moved to stroke the back of her head, feeling her silky blond hair.

"Nothing. Sorry.  I thought 'So that's what the tongue is supposed to do' and it made me laugh."

"That is one thing, but there's a lot more it's supposed to do too." He felt a stirring below his belt.

"Like what?" Her question sounded throaty, then she pushed her lips back up against his.

He caught her upper lip again; sucking it between his before again tracing its curves with his tongue. He felt her lips part and he allowed his tongue to ever so gently tease the sensitive inner curve of her lip.

He felt her tense slightly at the intrusion, so withdrew the touch, but still held her head in place. He was surprised when he felt her tiny tongue reach out and trace along his upper lip in imitation. He made sure that her tongue would slightly meet his as it finished its path. He moaned encouragingly when she passed over it in a slow, slick glide.

When she pulled back, his hand continued to caress her hair, but did not resist her retreat at all.

Her eyes looked nervous, unsure. "Did I do okay?"

He stroked from her temple down over her cheek and jawline. "Much more than okay. How did that feel?"

Her face lit up as she grinned. "Wonderful. Is that my first kiss?"

"Probably better not to tell people it was with your brother."

"Stepbrother, but you're probably right about that. I wasn't going to tell anyone cuz you're just a high school boy. So, I guess it'll be our secret?"

"Sure. Our secret, nerd." He traced her beautiful lips with one gentle fingertip. He felt a pulse in his groin when she caught his finger between those beautiful lips for an instant, unable to avoid seeing them wrapped around the tip of something besides his finger. "But only if I can be your second kiss too."

"I think I'd like that." Her mouth parted expectantly, gazing up at him.

He again rubbed his nose along hers. "But we should walk a little bit more. Let that first one settle in.".