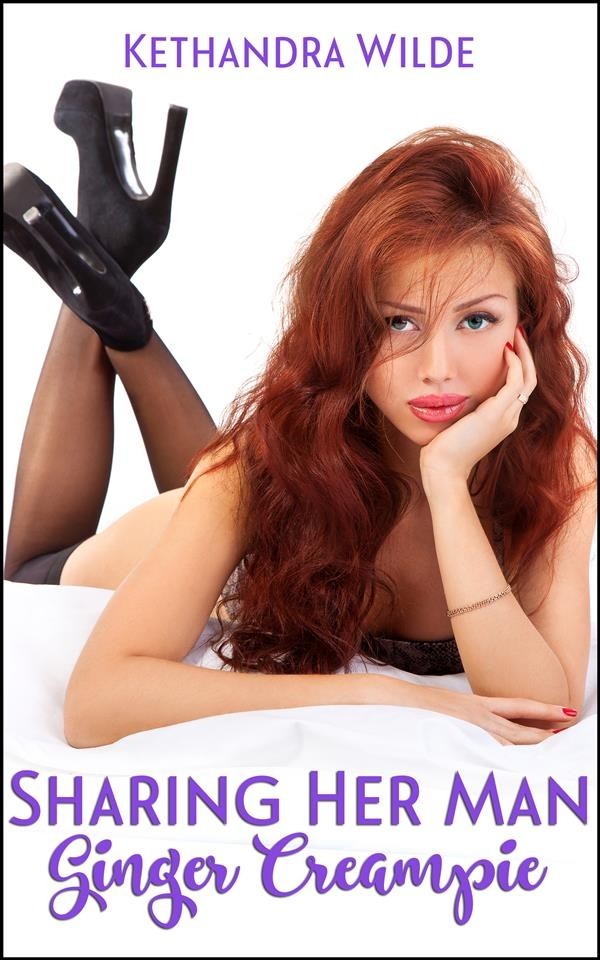 A young couple and their sexy redhead realtor realize multiple fantasies. Nothing is off limits as the three explore each other and their own deepest desires, in this sex-drenched and yet romantic tale of both giving and receiving.

Welcome to the first volume in Kethandra Wilde's new 'Sharing Her Man' series.

They watched their real estate agent exit her Lexis SUV; she was worth watching. She smiled, a bright white flash from within the shimmering frame of her hair, even redder than normal in the evening light.

Nicole held a bottle of champagne and a package of small plastic glasses. Ginger, the agent, unlocked the front door before beckoning Thom and Nicole into their new home.

Nicole said what they had both been thinking. Ginger always looked good: slim, fit, shining red hair swinging over her shoulders. High heels, defined calves and tan legs below skirts and dresses bordering on the formal seemed her norm. This one was more casual, a fitted knit dress striped in narrow horizontals. The stripes brought out Ginger's modest curves, showing her trim figure to good advantage. The knit fabric clung.

It seemed obvious that she wore no underwear, but Thom took a second look to be sure as he held the door. Nicole had a smirk on her face when he looked up. Ginger hadn't noticed him checking her out, but his wife had. Teasing him, Nicole bit into her lip, pantomiming playing with her own body as Ginger walked into the kitchen in front of the new owners. The knit dress accented her shapely backside.

The redheaded realtor did a little spin to face them. "Why thank you. I just got it today. You're the first to see it."

Nicole stepped to the side, closer, to inspect it. She brought Ginger's attention with her. It allowed Thom's eyes free rein to appreciate the view. His wife looked as sexy as always, in a simple combination of jeans and a t-shirt, her athletic, almost hard-body figure clear. Ginger was more girly, in form and dress.

Caught staring again, they were both looking at him. "Ah. I see two delicious, gorgeous women in my new kitchen and something is not right."

Ginger looked concerned. She had shown them close to a hundred homes in the past few months. "Not right?"

"Yes. Like I said." Thom stepped to the counter nearest his wife. "Two exquisite wom..."

"You said gorgeous." Count on Nicole to interrupt him right then.

"And delicious." Ginger looked like a cat that just won Mouse Trap, playing along with Nicole.

"Two gorgeous, exquisitely tasty..." He paused with a raised brow.

"Close enough, that'll do." Ginger conceded. Nicole had turned to face him.

"...ladies, and a bottle of bubbly, and it's not even open. That is not right." He grabbed the bottle by the neck, tearing the foil outer seal.

"Not for the champagne, silly. For saying I'm gorgeous." She hugged him close, then spun away. "Just a sec. I forgot something in the car."

Ginger put a hand on his forearm. "Yes, thank you, Thom."

"What? For calling you gorgeous? You definitely are that, Ginger."

She moved closer. Her eyes, green-blue and bright, shone up at him. "No. I was thinking about tasty and delicious."

Her hand moved, rested on his chest. She stretched up, her lips hovering close to his. The words were so low he barely heard them. So plain he barely needed to...