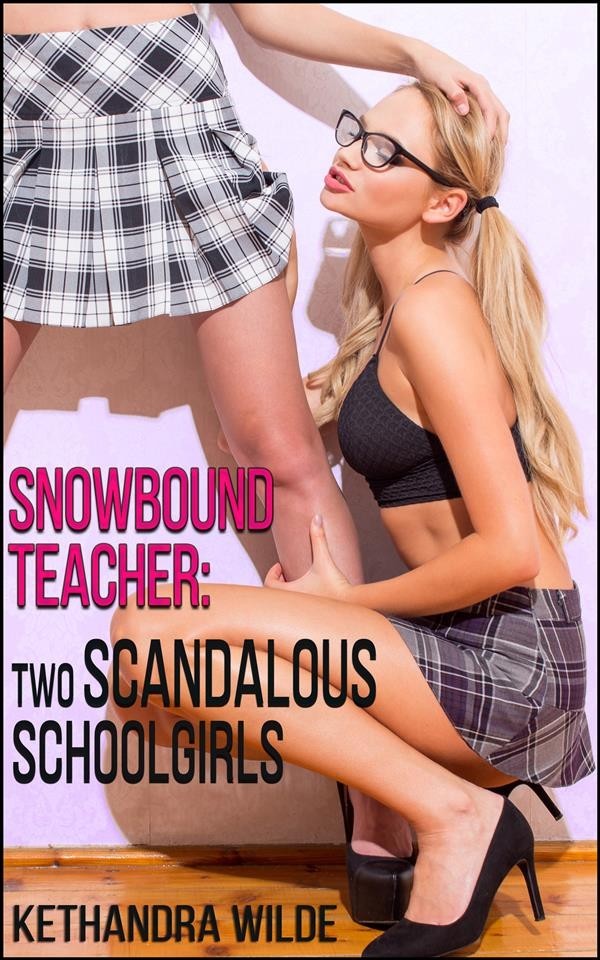 A Christmas snowstorm traps a young boarding school teacher in the dorm with  he thinks  only a single student, Missy, a tiny and precocious gymnast. He soon discovers that another girl is trapped with trapped with them, a buxom beauty who graduated last year.

When previous attractions are revealed, all three head down a shared path of intimacy and exploration.

Until now, his biggest actual trespass of the sacred wall of teacher-student trust had been that too-brief kiss with an even younger Trudy, barely eighteen, a grief and fear fueled instant of passion. Thoughts, fantasies - of Trudy then, of her and others, including confident little Missy, since - didn't count as trespasses, no matter what Jimmy Carter says about 'lusting in your heart.'

Finally drained, he shook off the last few drops, noticing he was starting to thicken as his sleepy body and reptile brain responded to his thoughts. He grinned at his dimly visible self in the small mirror over the sink, rinsed his hands before splashing his face. Wet fingers combed back his hair; the grin grew.

The thrill of his violation rushed through him. He could be fired, blackballed from teaching. He had no savings or back-up plan. And none of that mattered a bit.

He had tasted something here, something forbidden and sweet. A hunger had been fed, validated but in no way sated. Now that an almost unacknowledged lock had been opened, he was unsure if he could allow it to be once again secured.

In the windowless hallway, he just noticed the closed bedroom door before he would have collided with it. Pulling up short, the rapid click of a stove pilot light made him start, coming from the far end of the hall, in the kitchen. After the round flame bloomed to life, Trudy turned to face him.

She had somehow found one of his white sleeveless undershirts. It fit her like a snug, almost translucent, scandalously short dress. Face unreadable in the poor lighting, he heard her voice, but only just. "Hi."

Silent, he let his hand drop from where it hovered, near the knob to the closed door.

He stepped into the small kitchen, nearer to her. "I didn't know logs hibernated."

Dawn was beginning to brighten, still blueish through the kitchen's wide bay window. He could see a shyness, a doubt behind the challenge in her bright eyes.

His hands found her hips, enjoyed feeling his shirt over her skin, her near-naked availability, here in his home, his lair. "Like what?"

Her arms slipped over his shoulders, around his neck. "Do you know how long I've wanted to kiss you again?"

Her eyed scrunched up, almost tearful at his response. "You're not the only one."

He leaned forward, down. His nose stroked along hers. She made a small, almost whimpering noise. Pulling back, she looked up at him. "Can I ask one thing?"

She hesitated. "Will you kiss me? Last time I kissed you."

He nodded, silent. One hand rose to stroke her silky brown hair back from the side of her face. It settled behind her head while the other arm slipped around her narrow waist. He pulled her close. Her full chest pushed into him and up as she rose on her toes. His lips found hers.

Neither hurried this time. Soft nibbles lingered before lips parted wide enough for the first tentative tastings of either's tongue. She made a small, sweet, almost sub-audible gasp when the tip of his first flicked over her upper lip.