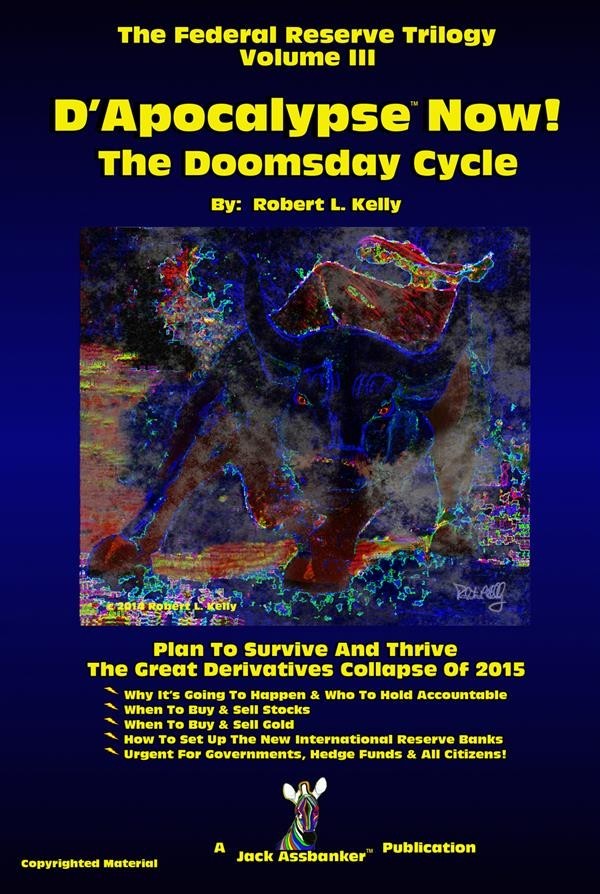 Christian author, Robert L. Kelly, once again, trumpets the virtual horn of Gabriel in D'Apocalypse Now! --- The Doomsday Cycle, the third book of "The Federal Reserve Trilogy." In a great and urgent warning to Christians, Jews, Muslims, Hindus and people of all creeds, colors and nations on earth, Mr. Kelly provides compelling evidence of economic evil, dark and ominous on the horizon. He christens it, the firestorm of "D'Apocalypse™" --- a great derivatives collapse and economic catastrophe heading directly our way. Mr. Kelly's meticulous work in the Federal Reserve Trilogy's first two volumes (The $30 Trillion Heist --- Scene Of The Crime? and The $30 Trillion Heist --- Follow The Money!), tells the story of what may be the greatest heist in history. Those books reveal a secret heist of nearly $30 Trillion by the banks, the elite and the Federal Reserve, which took the money without the consent, or knowledge, of Congress. This multi-trillion dollar caper snatched taxpayer-backed money to nefariously reimburse the banks' and elites' losses experienced during the credit crisis. Both works read like detective novels and reveal shocking details of the secret and unauthorized actions by the Federal Reserve System and a large number of co-conspirators. The $30 Trillion Heist asks the grave and important question everyone in Congress is afraid to know the answer to --- "Did The Federal Reserve And Its Co-Conspirators Commit Treason Against The United States Of America?" D'Apocalypse™ Now! provides a foreboding warning to all people, worldwide, of a Doomsday Cycle which lies dead ahead. It reveals in astonishing and scathing detail the greed, the avarice and the outrageous activities of the banks, the Federal Reserve, and the elite behind them. It is their abominable actions and diabolical scheme which shall directly cause the great D'Apocalypse --- set to firestorm across the world in 2015. Mr. Kelly documents exactly what has transpired, and written in a form and manner every government, every Wall Street pro, and every family, can read and immediately understand. The ubiquitous danger lying directly before everyone is daunting and the potential for devastation is immense. The chapter, "What To Do Now," provides ingenious plans which instruct governments, corporations, hedge funds, pension funds and individuals, precisely, how to prosper and best avoid the destruction of the Doomsday Cycle. Mr. Kelly's charts on the Dow and Gold are astounding and will help you --- both before, and after, D'Apocalypse™ strikes. This book also unveils a great secret. It reveals why the bankers and elite have purposely planned the hell storm called "D'Apocalypse". In a remarkable grab for power which shall be callous, heartless and ruthless, the bankers and elite plan to seize control of monetary authority, worldwide --- using the unbridled fear of D'Apocalypse™ and the towering debt of governments to accomplish their mission! Mr. Kelly's precise action plans provide nations and readers of all wealth classes specific recommendations to protect themselves --- and the ability to potentially help millions of others in the process. By any measure, Mr. Kelly's evidence is compelling. The activities of the 4 Horsemen of the D'Apocalypse (JP Morgan Chase, Citigroup, Bank of America and Goldman Sachs) and their elite owners, will simply send shivers up your spine. D'Apocalypse Now! should cause every politician to stand up and take notice, or duck for cover, because with the turmoil of the coming years, millions of angry citizens shall bear their scorn on them. All bankers should head for the hills --- your secret is now out!