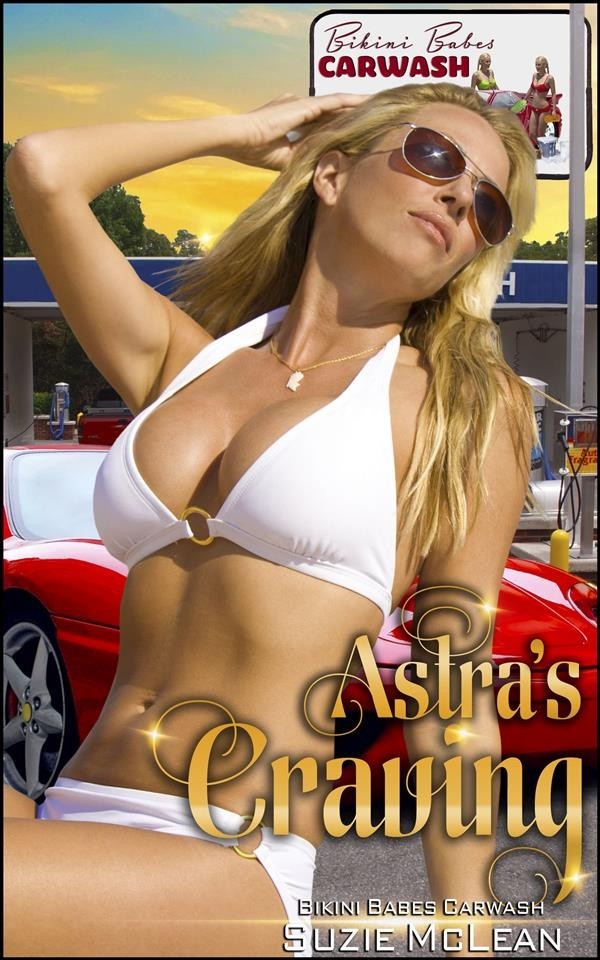 The grand opening of their fantastic new Bikini Babes’ Carwash is only two weeks away, and Astra is working hard to remodel the damaged bay that will become their luxurious ‘massage parlor.’ She doesn’t need sexy Jared Montrose sniffing around, trying to cozy up to her sorority sisters, just so she’ll hire him!

Or is a job the only thing he wants? Astra has always assumed he’s gay…but what if she’s been wrong? Just how far can she trust him…with their new business, or her vulnerable heart?

“Hey, Astra!” Phoebe popped out of the farthest bay, where she’d been cheerfully talking with Riley. “You’ve got company!”

“Who?” A welcoming smile began to curve Astra’s lips…but then her spine stiffened when Jared Montrose stepped out into the bright midday sun and lifted a hand in greeting. “I thought I told you ‘no!’”

“Hello, Astra. Morning, Elle.” He identified them effortlessly, which only annoyed her more, and aimed his most charming smile at her twin. “If I chip in toward lunch, can I snag a wing or two?”

Astra wanted to throw the entire bucket of fried chicken at him. And that, she mused with a puzzled frown, wasn’t like her at all. He hadn’t irritated her this way when they’d studied physical therapy together, so why should every single thing about him be striking a raw nerve now?

He was too damned charismatic for his own good, she decided. And Elle was too sweet and innocent to see through him. She’d get hurt…and then Astra would have to rip his head off and stuff it up his extremely fine ass. No one, but no one, messed around with her sister and got away with it.

“What brings you out here, Jared?” she asked crisply, brushing past him. “I distinctly remember telling you that we aren’t hiring.”

He snagged one of the heavy buckets, and casually bumped shoulders with her. “I hadn’t forgotten,” he said mildly. “Call it curiosity. You girls are the talk of the town, you know, between deciding to fix up this old place and finding that big bag of money buried under all that trash.”

A sudden pang of uneasiness rippled down her spine. “Stories grow in the telling,” she retorted. “It was a small bag—and it’s already been returned to its rightful owners.”

“I know.” He flashed her an amused grin. “But it’s still one helluva good story.”

Astra tried not to watch the way he was easily flirting with her sorority sisters. He could be utterly charming when he chose…but he’d always baffled her. Something about him didn’t quite ring true. Maybe it was just that he seemed larger-than-life, with his muscular body and broad shoulders, rich golden-blond hair, and classic chiseled features.

All the girls in her therapy class had goggled when he’d stepped through the door on that first day of class. How could a woman not gape in wondering awe when a man was just that drop-dead gorgeous? But he’d seemed so oblivious to their fascination, and to their often-obvious flirtation ploys, that she’d reluctantly written him off her short list of potential dates.

He hadn’t seemed interested in the other men who were attending the class, either…but was that only because he already had a boyfriend of his own? No one had ever seen him hanging out in the local gay bars.

But if he wasn’t gay, then why hadn’t he taken up at least one of the girls on their breathless open-ended offers? What normal red-blooded man would bypass multiple offers to go out and…anything?