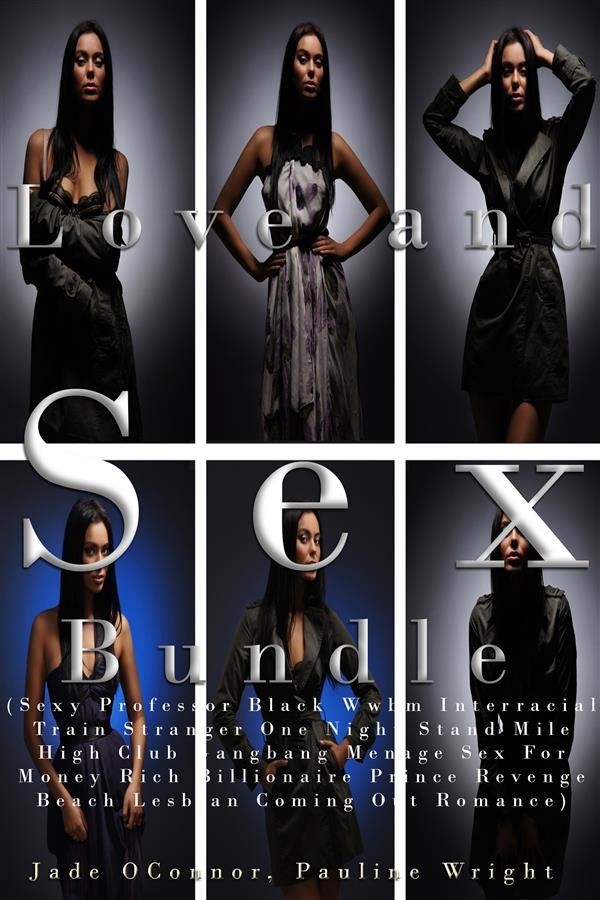 Love and Sex Bundle (Sexy Professor Black Wwbm Interracial Train Stranger One Night Stand Mile High Club Gangbang Menage Sex For Money Rich Billionaire Prince Revenge Beach Lesbian Coming Out Romance) 1. My Sexy Professor Loves Black Men (Professor Wwbm Interracial Romance) "Why don't we go to my house now? I said as I stood up from my chair. She grabbed her keys, handbag, and put on her coat. We walked to where she had parked car and got into it. I was going to give Mrs Blackwood a good time. Less than 40 minutes later, we were at Mrs Blackwood's house. I knew that she was not married. As soon as we got there, Mrs Blackwood told me to accompany her to the bedroom. 2. Sex on the Train (Train Stranger One Night Stand Romance) When a sexy lady meets a complete stranger on the train, she is as excited as hell. She wants to make love to the handsome stranger right there on the train. However, they must hurry up before someone enters their carriage. 3. Sex and the Mile High Club (Sex Mile High Club One Night Stand Romance) He had become very excited in anticipation of making love to me in the plane. By the way, he had not had his fix of love making that morning. We were careful not to make any noise for obvious reasons. 4. Sex in a Helicopter (Mile High Club One Night Stand Romance) After I finished drinking from my glass, Mark slowly took the glass away and then he started kissing me. I knew what he wanted to do but I was a bit uncomfortable because we were in a helicopter. 5. Gangbang on the Sea Part 1 (Gangbang Menage Romance) A pretty lady invites a few handsome men into her cabin on a cruise ship and orders them to give her as much pleasure as possible. Will they give in to her demands? 6. Gangbang on the Sea Part 2 (Gangbang Menage Romance) The menage continues with everyone getting more pleasure than they have had in a very long time. 7. Hitchhiking and a One Night Stand (One Night Stand Stranger Sex for Money Romance) As I always did when I took money from a client, I counted it. It was actually $250. I pointed this out to him and he said that I could keep the extra $50. He then asked me to go to the back of the truck so that we could have make love. 8. Sexy Models and the Billionaire Prince (Billionaire Prince Sex for Money One Night Stand Romance) When three sexy models are invited to the hotel suite of a visiting billionaire playboy Arab prince, little do they know what the prince has in store for them. 9. Sex in a Hot Air Balloon (Mile High Club One Night Stand Romance) Karen and I started kissing each other. The pilot smiled when he saw us kissing each other. Nothing kinky there! At least not yet. Then we decided to do more. 10. Becoming Lesbian (Lesbian Coming out Romance) I grabbed my phone, searched Paula's number and called her. I gave her my address and she immediately called a taxi and was soon on her way to meet me. I had no clothes on when I opened the door for Paula. We immediately went upstairs to my bedroom and started what was going to be about two hours of fun.