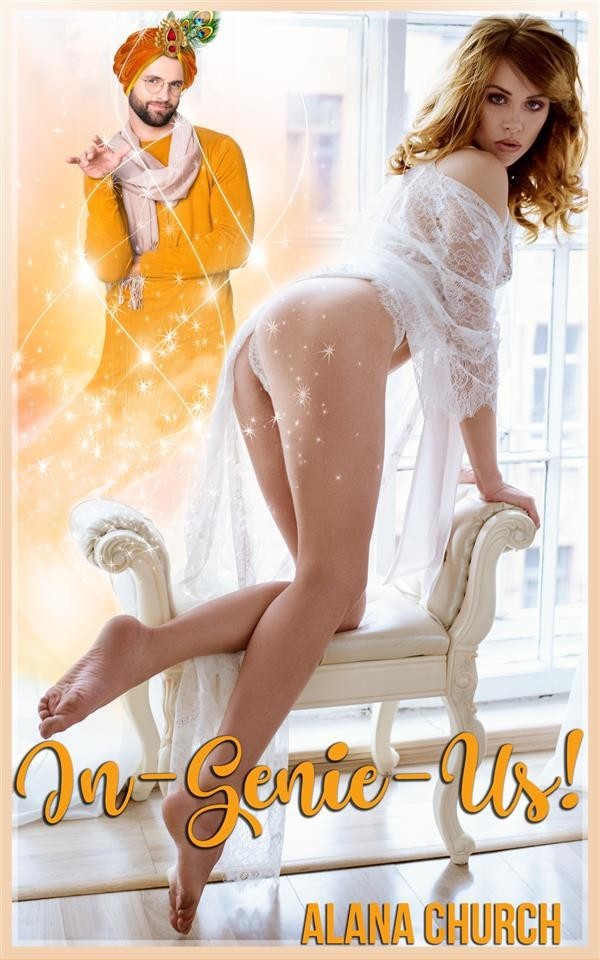 Shanaya is a lesbian, but her best friend - the woman she desperately loves - definitely isn't. Worse yet, she's about to marry a complete jerk. When a flamboyantly gay genie emerges from her antique necklace, she turns herself into a sexy man. But now can she learn to think like a man, act like a man, and make love like a man...before Allison makes the worst mistake of her life?

Shanaya nearly choked. "What? You're gay? A gay genie?"

He scowled at her. "Oh, great. And now I have to deal with a bigot, too?" He waved his fingers mockingly. "Are you scared I'm going to infect you with my horrible gay cooties?"

"You're a lesbian? Awesome!" The genie leaped to his feet and bounded towards her. "Gay high-five, girlfriend!"

She lifted a hand and their palms clapped together.

"Now," he said, leaning against her bookcase. "What can I do for you, o my mistress?"

Right. Genies grant wishes. But..."First of all, I need to get everything straight." She chewed her lip. "And I can't go on calling you...you. Especially if you're not going to tell me what your real name is. Not that I'm asking you to," she added hastily. "How about...Gene?"

"Gene?" He rolled his eyes dramatically. "I suppose I can live with that. Gene. Fine."

"And how many wishes do I get? Three?"

"Three?" Gene scoffed. "Girlfriend, that was centuries ago. You have to keep up with the times. Haven't you ever heard of inflation? You get lots more than that. But first, I have to lay out the rules."

"Rule one: No wishing for more wishes. That is total bullcrap. Also, you don't get to banish me and then summon me with a fresh set. You start with a finite number, and that's all you get until you banish me permanently or you die. Got it?"

Gene ticked off a second point on his fingers. "Next rule. No murder, violence, or emotional or psychological torture. We're kinder, gentler djinn, these days. You want to knock off your older sister so you can marry the sultan's son instead of her, you better take care of that yourself."

"Um...how long have you been away from Earth, anyway?"

He ignored her. "Third. I can give advice, if you ask for it. But I'm not going to volunteer information if you're going to do something spectacularly stupid." He grinned, sharklike, and she shivered. "Watching humans screw things up is half the fun.

She swallowed. "There's...there's this girl."

"And let me guess. She doesn't even know you exist, right? You've been pining your heart out for her for years, wanting one glance from her smoldering eyes, one kiss from her glistening lips?"

"Best friends. Sure. And you want me to change her sexuality so she'll desire you? Or maybe just a simple love spell?" His look was disgusted, and she hung her head in shame. "Hell and no. We can't take away free will. No potions, spells, hypnosis, or any of that crap. You want this girl in bed, you better find a better way to do it."

The thought was so audacious it took her breath away. She swallowed, cold sweat breaking out on the back of her neck. "Could you...could you turn me into a man?"