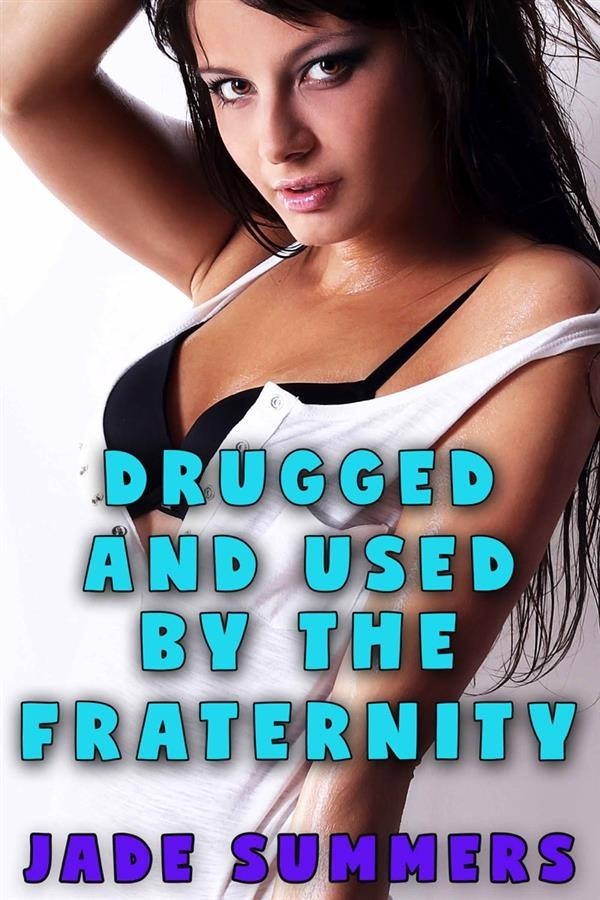 When Andrea goes to a frat house with her friend she doesn't expect that she will be drugged and plied with an alcohol enema. She's surprised when she finds herself naked and surrounded by the entire fraternity. But what she's most surprised by is that she loves everything those nasty boys do to her. Author's Note: Drugged and Used by the Fraternity is also published in a non-con, hardcore format under the title Gang-raped by the Fraternity by Belle Bottoms Excerpt: "Wait … where am I?" I said as I felt my body being moved around. The air felt cold like I was outside. I heard voices and laughter and I wasn't sure where I was, but I could tell I was lying on something hard, like a table. "Get that beer bong in her ass! This is gonna be good." Beer bong? What the hell are they talking about? I thought as I felt hands grip my legs. Who's ass? I was really confused because everything below my waist felt cold like my skirt had been pulled up. I tried to look down at my legs but when I did I couldn't focus on anything. I felt the hands that were gripping my thighs push my legs up into the air, then I felt like I was being folded in half. The I realized that my arms and legs were being held down above my head. I tried to move but nothing happened. I was being held down my multiple hands. Then I felt something cold going into my asshole, the sensation of icy coldness spreading up inside me. It felt like cold water was shooting into me somehow. I didn't understand what was going on but then I remembered the words beer bong and I realized what was going on. They were forcing beer up inside me through my asshole. I couldn't believe what was happening. I tried to struggle again but I still couldn't move. But the longer I laid there the less I wanted to struggle. The drink that Steve had given me had really relaxed me and apparently knocked me out but now I was starting to feel drunk too. "Who's first?" "I've got this one," I heard one of the guys yell as the tube in my ass was removed. Then before any of the liquid could come back out something else took the place of the beer bong tube. I felt an enormous cock slide past my sphincter and slam inside me. I'd never had anything in my asshole before and it was incredibly uncomfortable. But because I was so drunk and doped up, I didn't really care that much. It was really uncomfortable to be fucked with all the liquid inside me, though. I felt it sloshing around and creating pressure everywhere and I just wanted it all to stop. After the guy inside my asshole came and pulled his cock out I felt the pressure in my intestines explode as my asshole opened up like a cork had just been removed. My legs were pressed back next to my head so when the stream of liquid came out it shot straight up into the air, arching up and forward so that it sprayed onto the lawn in front of me. I watched in a daze as the clear liquid came out of me like a fountain for was seemed like ten minutes. All around me the guys who were holding me down and standing around yelled and laughed and cheered like crazy while they all watched the beer squirt up into the air. It was humiliating and normally I would have wanted to die, but I didn't care because at that point. I was just glad to have all of that beer out of me and I was starting to feel really giddy.