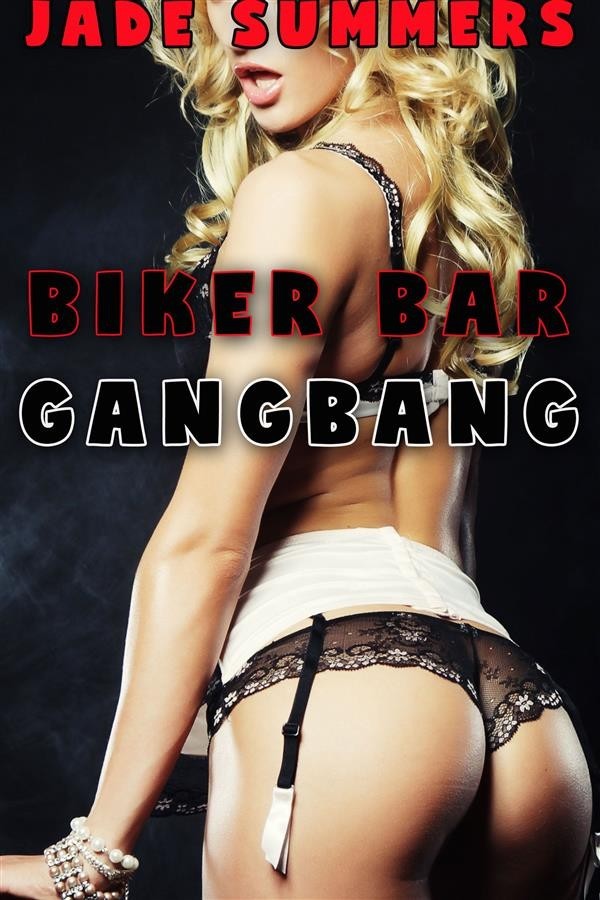 Laney is on her way home from a party. She's lost and she has to pee. Thinking she can get some help in a dark bar on a deserted street she goes in. The men inside pull off her skimpy dress and take turns using her for hours and she gets to experience her ultimate gangbang fantasy. Excerpt: "Would it be possible to use the ladies room?" I asked the bartender. "Sure, sweet thing. But it's gonna cost you," he said with a grin. "Well, I'm on my way home. I got kind of lost trying to find the subway and I really just need to pee and get directions if that's okay." "The bartender looked at the other guys that were sitting at the bar and gave them a funny look. "No problem. It's the second door at the end of the hall there down." I smiled at him and headed in the direction that he pointed. I just wanted to use the bathroom and get out of there as quickly as possible. I didn't think that I was in any danger but I really didn't like the way the bartender looked at the guys sitting at the bar. When I left the bathroom it seemed like there were a few more guys crowded around the bar. They were all huge. Tall and burly with beards and leather jackets and as I approached them I had to squeeze through a few of them to get past the bar. But every guy I passed didn't budge when I said excuse me. They just stayed where they were standing and let my body brush up against theirs. Suddenly it felt like they were all crowding around me and one guy who was kind of scary looking stood right in my path and wouldn't move. "Excuse me, please, I just need to get by." "Where are you headed so quick, little girl? Stay and have a drink with us. We won't bite," he said with a laugh as the rest of the men who were surrounding me joined in. "No, I really just want to get home." But as I spoke I felt one of the men come up behind me. He lifted my the skirt of my dress up and pulled my ass backward so that it was pressed up against his jeans. I could feel his hard cock pressing into the space between my ass cheeks. "Hey!" I said as I twisted to look at the guy behind me. But as soon as I did the man who was blocking my way in front of me grabbed the top of my dress and pulled it down and my boobs popped out. I had a bra on but it was really low-cut so that it didn't show under the dress, and it barely covered my breasts. The man behind me pulled my dress all the way down to the floor and pulled my arms behind me, then the man in front of me undid the front clasp on my bra. My breasts spilled out and the man in front of me grabbed both of them in his hands and squeezed them hard.