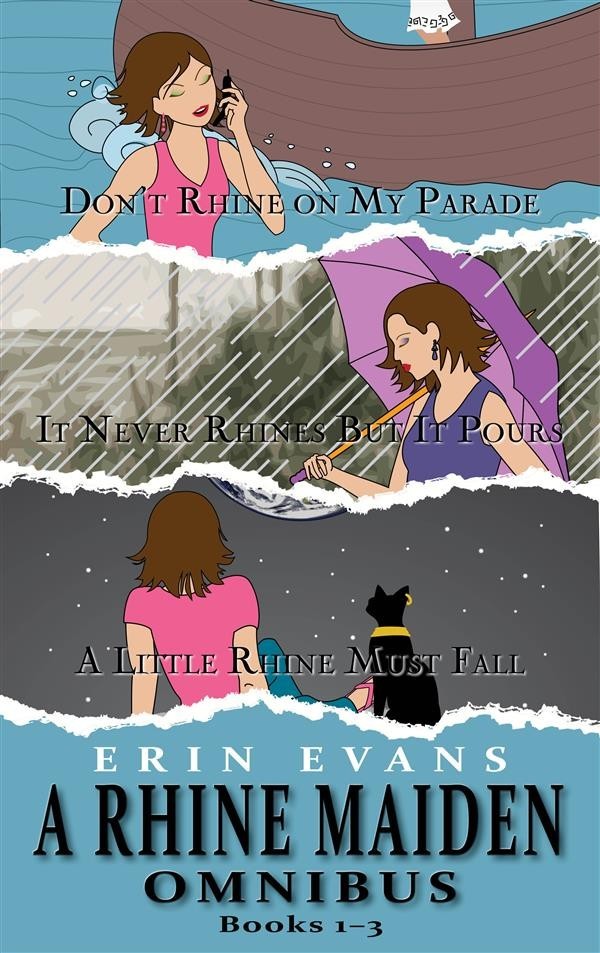 This Omnibus edition collects the first three Rhine Maiden novels into a single volume. Don't Rhine on My Parade: "She speaks and they obey," but even a supernatural ability can't help this stay-at-home mom control her own life. Don't Rhine on My Parade is a laugh-out-loud urban-fantasy with an unlikely protagonist, a young mother who has an unusual power. Blessed, or perhaps cursed, with the ability to command obedience, Piper Cavanaugh's normal life turns upside down in this full-length novel. A descendant of the Rhine Maidens who sang sailors to their deaths, Piper has vowed to never use her power of command, but one little slip-up and her secret has come back to bite her - literally. Now she must gain permission to join the United Supernatural Beings, or it's open hunting season on all of humanity. While juggling toddlers, keeping her husband in the dark, and babysitting her rebellious kid sister, Piper finds herself befriending a vampire, stealing from murderous witches, and doing battle with "Satan," otherwise known as her mother-in-law. And she thought grocery shopping with her kids was hard! Don't Rhine on My Parade is a refreshing switch for readers who long for a more relatable heroine. With commonsense and sass, Piper handles diapers to decapitations as only a mother can. Filled with comedy, action, and thrills, Don't Rhine on My Parade expands the borders of urban fantasy into the suburbs! It Never Rhines But it Pours: Rhine maiden, Piper Cavanaugh, is on the job as a Guardian hit-man, but can she execute an innocent witch? When she discovers her target has been framed, Piper has to find the true killer or risk losing her job – and her life. As she sorts through a dwindling number of suspects, Piper tries to keep her trigger-happy vampire friend in line, fix a back-fired spell, deal with some unwanted house guests, and still find time to mother her two toddlers. With every use of her power of command bringing her closer to immortality, Piper soon realizes, it never “rhines” but it pours! A Little Rhine Must Fall: Rhine Maiden, Piper Cavanaugh, is no stranger to unusual houseguests, but an alien and an Egyptian goddess might be more than even she can handle. Throw in a homicidal vampire bent on revenge, and an pushy mother-in-law bent on redecorating, and Piper’s world is in turmoil. With her life crumbling around her and the future of mankind in the balance, Piper must reveal her secret ability and risk losing everything she holds dear.