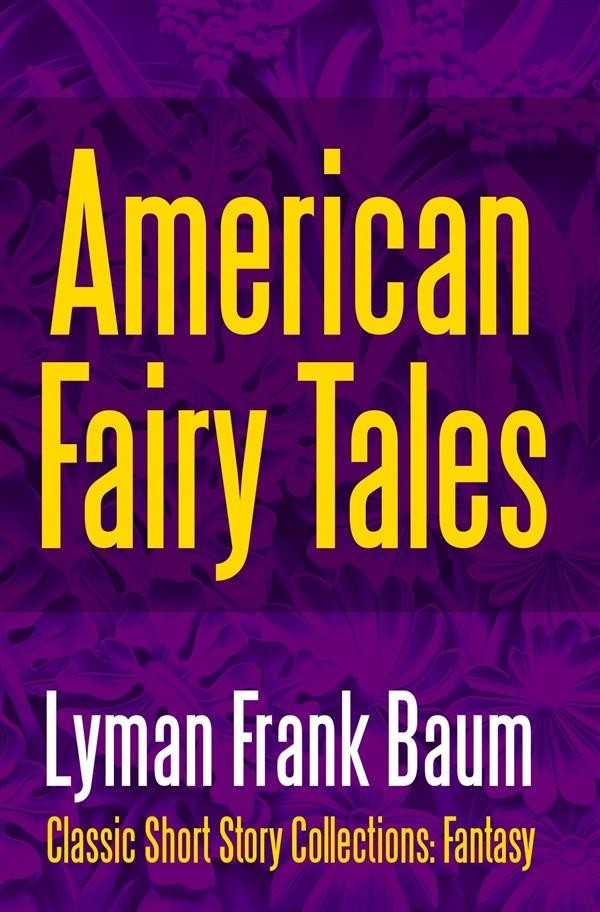 American Fairy Tales is the title of a collection of twelve fantasy stories by L. Frank Baum, published in 1901 by the George M. Hill Company, the firm that issued The Wonderful Wizard of Oz the previous year. This volume contains12 Fairy Tales from the author of the Wizard of Oz series of books. Inspired by Lang and the Brothers Grimm, Baum sought to create an American type of fairy tales, avoiding the usual violence and roman often found in these sort of stories. L. Frank Baum was doing well in 1901, better than ever before in his life. He had written two popular books, Father Goose: His Book and The Wonderful Wizard of Oz, and was determined to capitalize on this success. In addition to American Fairy Tales, Baum's Dot and Tot of Merryland and The Master Key appeared in 1901. Publisher George M. Hill sold the serialization rights to the twelve stories in AFT to five major newspapers, the Pittsburgh Dispatch, the Boston Post, the Cincinnati Enquirer, the St. Louis Republic, and The Chicago Chronicle. The stories appeared between March 3 and May 19, 1901; the book followed in October. The Box Of Robbers (excerpt) No one intended to leave Martha alone that afternoon, but it happened that everyone was called away, for one reason or another. Mrs. McFarland was attending the weekly card party held by the Women's Anti-Gambling League. Sister Nell's young man had called quite unexpectedly to take her for a long drive. Papa was at the office, as usual. It was Mary Ann's day out. As for Emeline, she certainly should have stayed in the house and looked after the little girl; but Emeline had a restless nature. "Would you mind, miss, if I just crossed the alley to speak a word to Mrs. Carleton's girl?" she asked Martha. "'Course not," replied the child. "You'd better lock the back door, though, and take the key, for I shall be upstairs." "Oh, I'll do that, of course, miss," said the delighted maid, and ran away to spend the afternoon with her friend, leaving Martha quite alone in the big house, and locked in, into the bargain. The little girl read a few pages in her new book, sewed a few stitches in her embroidery and started to "play visiting" with her four favorite dolls. Then she remembered that in the attic was a doll's playhouse that hadn't been used for months, so she decided she would dust it and put it in order. Filled with this idea, the girl climbed the winding stairs to the big room under the roof. It was well lighted by three dormer windows and was warm and pleasant. Around the walls were rows of boxes and trunks, piles of old carpeting, pieces of damaged furniture, bundles of discarded clothing and other odds and ends of more or less value. Every well-regulated house has an attic of this sort, so I need not describe it. The doll's house had been moved, but after a search Martha found it away over in a corner near the big chimney. She drew it out and noticed that behind it was a black wooden chest which Uncle Walter had sent over from Italy years and years ago—before Martha was born, in fact. Mamma had told her about it one day; how there was no key to it, because Uncle Walter wished it to remain unopened until he returned home; and how this wandering uncle, who was a mighty hunter, had gone into Africa to hunt elephants and had never been heard from afterwards... - - - - Lyman Frank Baum (May 15, 1856 – May 6, 1919), better known as L. Frank Baum, was an American author chiefly famous for his children's books, particularly The Wonderful Wizard of Oz and its sequels. He wrote a total of 14 novels in the Oz series, plus 41 other novels, 83 short stories, over 200 poems, and at least 42 scripts. He made numerous attempts to bring his works to the stage and the nascent medium of film; the 1939 adaptation of the first Oz book would become a landmark of 20th century cinema. His works anticipated such century-later commonplaces as television, augmented reality, laptop computers (The Master Key), wireless telephones (Tik-Tok of Oz), women in high-risk and action-heavy occupations (Mary Louise in the Country), and the ubiquity of advertising on clothing (Aunt Jane's Nieces at Work).