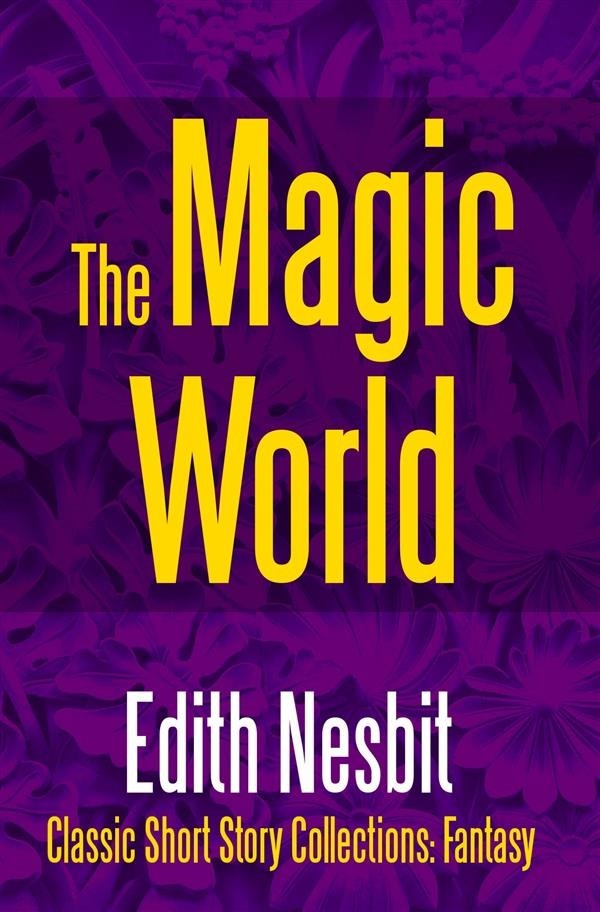 The Magic World is an influential collection of twelve short stories by E. Nesbit. It was first published in book form in 1912 by Macmillan and Co. Ltd., with illustrations by H. R. Millar and Gerald Spencer Pryse. The stories, previously printed in magazines (like Blackie's Children's Annual), are typical of Nesbit's arch, ironic, clever fantasies for children. Some of the twelve stories in the collection are: "The Cat-hood of Maurice" — a boy abuses the family cat, and learns to see things from the feline point of view. "The Mixed Mine" — two boys find a magic spyglass, and use it to make their fortunes. "Accidental Magic" — Quentin falls asleep on the altarstone at Stonehenge, and wakes in Atlantis. "The Princess and the Hedge-pig" — King Ozymandias and Queen Eliza plan a secret christening for their Princess Ozyliza, to avoid a wicked fairy's curse. Things go awry. "Septimus Septimusson" — he is the seventh son of a seventh son, who can see fairies and hear the beasts speak; and he must seek his fortune. "The White Cat" — a boy finds a china ornament in the attic; it proves to be a magic talisman. "Belinda and Bellamant" — they are a princess and prince suffering curses; a talking bat helps resolve their problems. "Justnowland" — Elsie visits a magic land of giant crows, and a dragon. "The Related Muff" — a sensitive boy, dismissed as a "muff" by his cousins, proves himself a hero in a crisis. "The Aunt and Amabel" — a girl enters a magic world through a wardrobe. "Kenneth and the Carp" — unjustly accused, a boy transforms into a fish and redeems his honor. "The Magician's Heart" — an evil magician distributes curses at royal christenings. Complications ensue. The story "The Aunt and Amabel" has received attention as a precursor of C. S. Lewis's first Narnia novel, The Lion, the Witch, and the Wardrobe."Accidental Magic" has been seen as exerting an influence on J. R. R. Tolkien. Conversely, Nesbit's "Justnowland" displays the influence of Lewis Carroll's Alice in Wonderland. Elisabeth Beresford's 1964 book Awkward Magic was published in the United States under the title The Magic World. Beresford has been identified as an imitator of Nesbit. Nesbit's little girls tend to get in trouble over their efforts at gardening. Elsie in "Justnowland" uproots turnip plants she mistakes for weeds; Amabel cuts chrysanthemum blossoms from a greenhouse and tries to plant them in a flower bed. Stories in the collection feature talking animals and human/animal transformation, with implications regarding animal welfare and avoidance of mistreatment. The opening story is the most explicit in its message against cruelty to animals. (Wikipedia) About Edith Nesbitt: Edith Nesbit (married name Edith Bland; 15 August 1858 – 4 May 1924) was an English author and poet; she published her books for children under the name of E. Nesbit. Nesbit published approximately 40 books for children, including novels, collections of stories and picture books. Collaborating with others, she published almost as many more. According to her biographer, Julia Briggs, Nesbit was "the first modern writer for children": Nesbit "helped to reverse the great tradition of children's literature inaugurated by Lewis Carroll, George MacDonald and Kenneth Grahame, in turning away from their secondary worlds to the tough truths to be won from encounters with things-as-they-are, previously the province of adult novels." Briggs also credits Nesbit with having invented the children's adventure story. Noël Coward was a great admirer of hers and, in a letter to an early biographer Noel Streatfeild, wrote "she had an economy of phrase, and an unparalleled talent for evoking hot summer days in the English countryside." Among Nesbit's best-known books are The Story of the Treasure Seekers (1898) and The Wouldbegoods (1899), which both recount stories about the Bastables, a middle-class family that has fallen on (relatively) hard times. The Railway Children is also known from its adaptation into a 1970 film version. Gore Vidal called the time-travel book, The Story of the Amulet one in which "Nesbit's powers of invention are at their best." Her children's writing also included numerous plays and collections of verse. She created an innovative body of work that combined realistic, contemporary children in real-world settings with magical objects – what would now be classed as contemporary fantasy – and adventures and sometimes travel to fantastic worlds. In doing so, she was a direct or indirect influence on many subsequent writers, including P. L. Travers (author of Mary Poppins), Edward Eager, Diana Wynne Jones and J. K. Rowling. C. S. Lewis was influenced by her in writing the Narnia series and mentions the Bastable children in The Magician's Nephew. (Wikipedia)