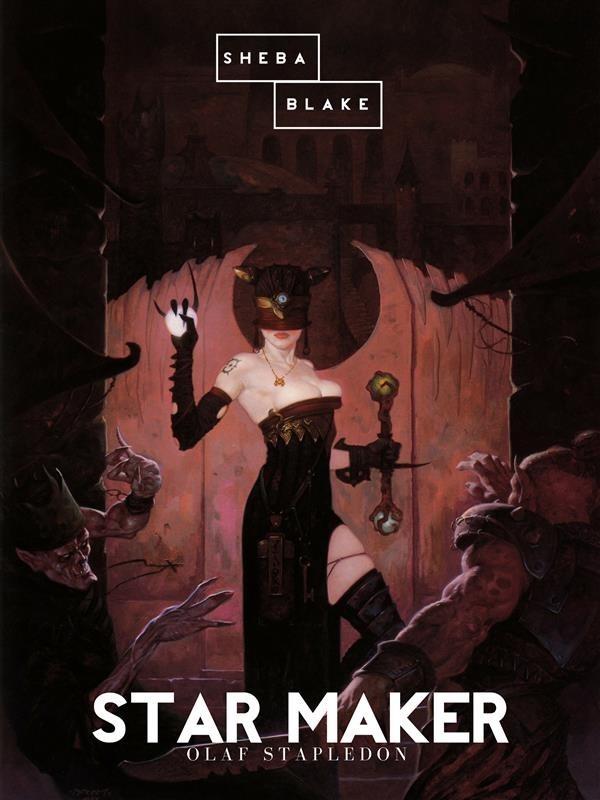 Star Maker is a science fiction novel by Olaf Stapledon, published in 1937. The book describes a history of life in the universe, dwarfing in scale Stapledon's previous book, Last and First Men (1930), a history of the human species over two billion years.

Star Maker tackles philosophical themes such as the essence of life, of birth, decay and death, and the relationship between creation and creator. A pervading theme is that of progressive unity within and between different civilizations. Some of the elements and themes briefly discussed prefigure later fiction concerning genetic engineering and alien life forms. Arthur C. Clarke considered Star Maker to be one of the finest works of science fiction ever written.

A single human narrator from England is transported out of his body via unexplained means. He realizes he is able to explore space and other planets. After exploring a civilization on another planet in our galaxy at a level of development similar to our own that existed millions of years ago thousands of light years from Earth (the "Other Earth") in some detail, his mind merges with that of one of its inhabitants, and as they travel together, they are joined by still more minds or group-minds. This snowballing process is paralleled by the expansion of the book's scale, describing more and more planets in less and less detail.

The disembodied travelers encounter many ideas that are interesting from both science-fictional and philosophical points of view. These include the first known instance of what is now called the Dyson sphere; a reference to a scenario closely predicting the later zoo hypothesis or Star Trek's Prime Directive; many imaginative descriptions of species, civilizations and methods of warfare; descriptions of the Multiverse; and the idea that the stars and even pre-galactic nebulae are intelligent beings, operating on vast time scales. A key idea is the formation of collective minds from many telepathically linked individuals, on the level of planets, galaxies, and eventually the cosmos itself. A symbiotic species, each individual composed of two species, both non-humanoid, is discussed in detail.

Normally detached from the galaxy's turmoil, they intervene in a deus ex machina to end the threat of a civilization dedicated to the idea of total insanity trying to force its mentality onto one stellar civilization after another. The climax of the book is the "supreme moment of the cosmos", when the cosmical mind (which includes the narrator) attains momentary contact with the Star Maker, the creator of the universe. but stands in the same relation to it as an artist to his work, and calmly assesses its quality without any feeling for the suffering of its inhabitants. This element makes the novel one of Stapledon's efforts to write "an essay in myth making".

After meeting the Star Maker, the traveler is given a "fantastic myth or dream," in which he observes the Star Maker at work. He discovers that his own cosmos is only one of a vast number, and by no means the most significant. He sees the Star Maker's early work, and he learns that the Star Maker was surprised and intensely interested when some of his early "toy" universes — for example a universe composed entirely of music with no spatial dimensions — displayed "modes of behavior that were not in accord with the canon which he had ordained for them." He sees the Star Maker experimenting with more elaborate universes, which include the traveler's own universe, and a triune universe which closely resembles "Christian orthodoxy" (the three universes respectively being hell, heaven, and reality with presence of a savior).