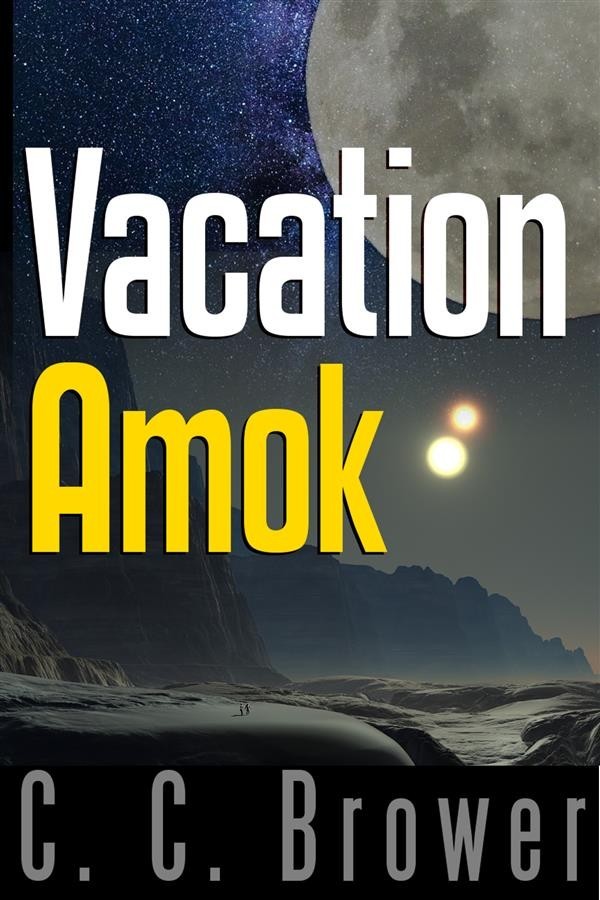 Some vacation. Not like I'd planned - or the brochures.
Now I'm in a space suit after some sort of freak accident. Lucky I knew how to get in one, and one was nearby. First time for everything.
But now, I had just so much air, and a huge gap to jump. Because the explosion left a big hole behind. Guess there's a first time for more than one thing...
Excerpt:
No power. Little air.
Deep space, off the trade routes.
Helluva way to start a vacation.
The explosion had happened in hyperspace. It threw us out of “warp” and we appeared in normal space several parsecs from where we could be found.
My problem was more immediate though. Power and Air existed on the other half of the ship.
Separated from me by a big hole that explosion had left.
And, no, I wasn't trained at this spaceship survival stuff. I worked in a research group, back of a library, in a college town. My training wasn't in surviving space-liner wrecks. We all had to take the required emergency drills before we could board for the vacation. Not that it gave us much experience with these things. Like those boring lectures flight attendants give on airlines about what to do when the plane gets in trouble. (Yawn.)
But now we were in real trouble. Deep in it.
At least the suit I found mostly fit. Too big is better than too small.
And why I was able to find one near that bathroom I was using at the time - that wasn't my main question right now.
There were few air minutes left and a big gap to travel. Then somehow getting in on the other side without tearing my suit open.
Let's see, give a straight push, not too hard. Because I'd have to cushion my "fall" on the other side. Looked easy in the movies.
Here goes...
Well, here I am, floating.
Getting there.
Closer.
Oh, come on.
Here we go. A little more...
Watch that rotation. (Like I could do much other than move my arms, but then everything else moved in turn.)
Hope my gloves hold.
"Be still, poor heart." Breathe. Breathe regular.
Here we go.
And...

Bonus Stories:
The Emperor's Scribe -  How a young scribe taught new truths to an old Emperor through his calligraphy, and disappeared one day...
The Snow Cave ( Part 1) - When a sudden winter storm blew in, a rescuer has to find shelter. Luckily, she remembered an old cave on the maps. The partially-open door to it is large enough to fit a semi-truck. If she's lucky, she'll be able to squeeze in behind it. If not, they'd find her here, frozen...
Long Overdue Santa - An older pet misses the children and Santa as much as her Masters. It's another Christmas, and this family dog finds a red hat on the driveway that shouldn't be there...
Get Your Copy Now!