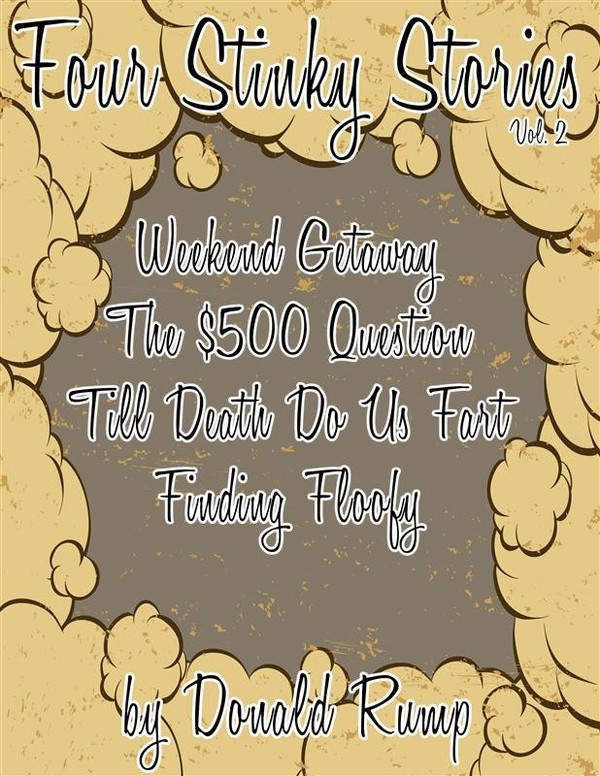 Celebrating the best of fart fiction, Donald Rump weaves together four new flatulent tales of love, betrayal, flesh-eating cannibals and everyone's favorite green gas in one dastardly volume. Intended for mature (and not so mature) audiences. Approximately 14,000 words in all.

Perkins Deadwood can't believe his ears. His twelve-year-old son just asked for a pet fart for Christmas. And not just any fart, a Spanish fart. Hay caramba!

Can the used car salesman talk his son out of it? Or is this Christmas really going to stink?

When a man falls head over heels for a murderous fart, he has difficulty coping with her mysterious departure. Was it something he said? Something he did? Was his penis too small? None of it makes any sense. "I will find you, my darling Floofy. Even if it's the last thing I do!"

TILL DEATH DO US FART

Helen Hubbard's fears have finally been confirmed. During brunch one morning in her favorite restaurant, her husband Gary confesses to cheating on her, and is ready to leave at a moment's notice. When she pries deeper into the matter, she discovers more about his mysterious lover Muffy than she cares to know. “So you’re leaving me for a fart???” Helen exclaimed.

When Martin Dollop and Arthur Bodine set off for a romantic vacation in the islands, they have no idea what they're in for. Now rotting away in a Mexican jail cell, it appears that they've reached the end of their rope. Even the pinche guard won't do them the honor of putting a bullet in their heads, and offers each a shot of poison to end their suffering.

Will the two lovebirds cash in on their free weekend getaway and make things right between them? Or will the doomed couple kill each other in the process?