The Chessmen of Mars 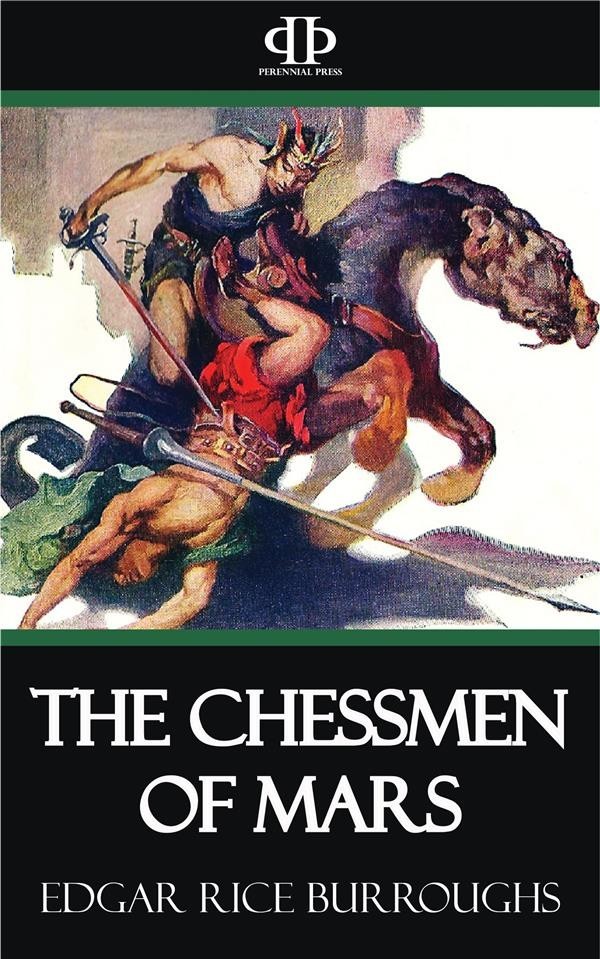 The Chessmen of Mars

Shea had just beaten me at chess, as usual, and, also as usual, I had gleaned what questionable satisfaction I might by twitting him with this indication of failing mentality by calling his attention for the the time to that theory, propounded by certain scientists, which is based upon the assertion that phenomenal chess players are always found to be from the ranks of children under twelve, adults over seventy-two or the mentally defective—a theory that is lightly ignored upon those rare occasions that I win. Shea had gone to bed and I should have followed suit, for we are always in the saddle here before sunrise; but instead I sat there before the chess table in the library, idly blowing smoke at the dishonored head of my defeated king.
While thus profitably employed I heard the east door of the living-room open and someone enter. I thought it was Shea returning to speak with me on some matter of tomorrow's work; but when I raised my eyes to the doorway that connects the two rooms I saw framed there the figure of a bronzed giant, his otherwise naked body trapped with a jewel-encrusted harness from which there hung at one side an ornate short-sword and at the other a pistol of strange pattern. The black hair, the steel-gray eyes, brave and smiling, the noble features—I recognized them at once, and leaping to my feet I advanced with outstretched hand.
"John Carter!" I cried. "You?"
"None other, my son," he replied, taking my hand in one of his and placing the other upon my shoulder.
"And what are you doing here?" I asked. "It has been long years since you revisited Earth, and never before in the trappings of Mars. Lord! but it is good to see you—and not a day older in appearance than when you trotted me on your knee in my babyhood. How do you explain it, John Carter, Warlord of Mars, or do you try to explain it?"
"Why attempt to explain the inexplicable?" he replied. "As I have told you before, I am a very old man. I do not know how old I am. I recall no childhood; but recollect only having been always as you see me now and as you saw me first when you were five years old. You, yourself, have aged, though not as much as most men in a corresponding number of years, which may be accounted for by the fact that the same blood runs in our veins; but I have not aged at all. I have discussed the question with a noted Martian scientist, a friend of mine; but his theories are still only theories. However, I am content with the fact—I never age, and I love life and the vigor of youth...