SCALES YOU CAN USE! 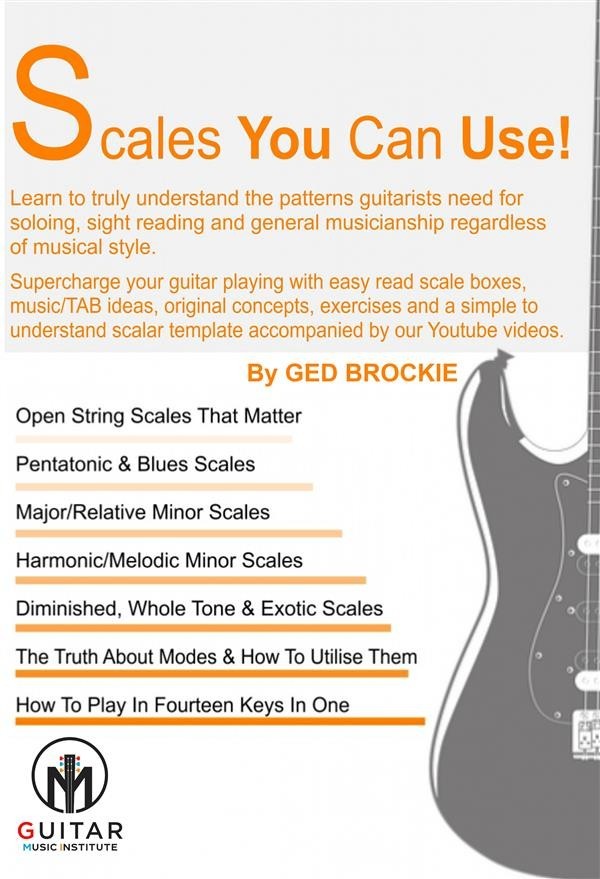 SCALES YOU CAN USE!

WHAT'S INSIDE GUITAR SCALES YOU CAN USE?

INDEPTH LEARNING - GUITAR SCALES YOU CAN USE IS MORE THAN JUST A BOOK OF SCALE PATTERNS FOR GUITARISTS.

Learn the scale patterns that are both powerful and meaningful and will really make the difference to your playing, improvisations and performances.

A thought through method of learning including a template system of progressive scale tuition that acts as a force multiplier for your overall understanding of how the guitar and scales are created and used. This is a full colour publication including large easy to read scale forms, fretboard diagrams and descriptive images.

Covers the widest range of scales that guitarists need to know including: major, natural/harmonic and melodic minor scales over the entire neck in seven positions. Pentatonic, Blues, Diminished, and whole tone scales are also included. Learn how you can play major and minor pentatonic patterns in 10 different keys in just one position. This book also includes how to play fourteen different keys in one position using modal scales giving you complete musical control over key changes! Included are fret maps detail a simple to understand root based system in two key positions giving you complete understanding over the entire guitar fretboard. Theoretical explanations of pentatonic, major, melodic and harmonic minor, blues, chromatic, whole tone and diminished scales. A large suite of “exotic” scales are also included for those that are looking to learn patterns that are on the fringe.

Original music examples and pieces provided in music and TAB throughout Guitar Scales You Can Use! enabling you to learn the patterns whilst you actually play music and not just patterns. Included open string patterns cover major, minor, pentatonic and blues scales. If you think you know what the cycle of fifths is about, then think again! Guitar Scales You Can Use! shows how you can use this often overlooked music tool to the best effect.

HOW THE INFORMATION IS DELIVERED

Traversing the entire neck in one key, playing round the cycle of fifths in one position, major, harmonic and minor scale comparison sheets are included to give you the best chance of getting your scalar knowledge together once and for all! Modes are also covered and demystified showing you how to both create and apply these often misunderstood patterns.

All three chapters are backed up by our Youtube videos viewable via QR codes so you can view the scales being demonstrated by GMI’s Ged Brockie.