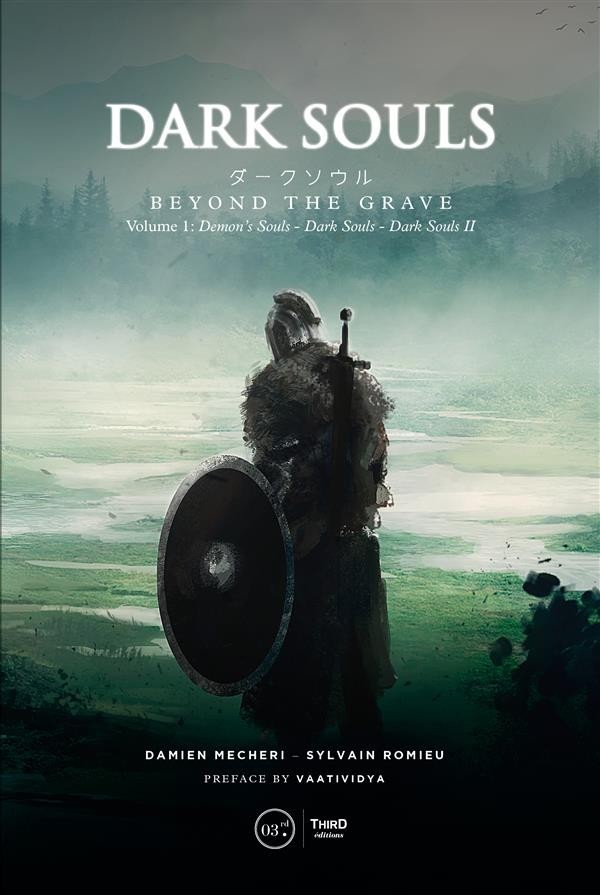 Story of a saga video games...

If the Dark Souls series managed to seduce players and journalists, it was mainly by word of mouth. It was such a great success that Dark Souls 2 was named “Game of the Year” 2014 by the vast majority of gaming magazines and websites. To date, this saga is one of the most important in the gaming industry. The odd thing is that these games are well known for their difficulty and their cryptic universe. This publication narrates the epic success story, but also describes its gameplay mechanics and its specific lore across more than 300 pages. Characters, plots and the scenario of the three Souls (Demon's Souls, Dark Souls and Dark Souls II) are deciphered by Damien Mecheri and Sylvain Romieu, who spent a long year studying these dense and enigmatic games down to the smallest detail.

The serie Dark Souls and her spiritual father Demon's Souls will not have secrets for you anymore!

In May 2014, Hidetaka Miyazaki succeeded Naotoshi Zin as president of FromSoftware, after the studio was purchased by Kadokawa Shoten. This was a highly significant promotion for the person who had led the company’s most successful project, Dark Souls. And yet, he did not lose from view what had attracted him to the field: an insatiable creative drive. In spite of his new status within the studio, one of the conditions he requested and was granted was to remain creative director of his new project: Bloodborne. This allowed him to successfully design this spiritual successor to the first Souls game, while also assuming his new responsibilities. Given his drive to work and create, it is not surprising how quickly Miyazaki moved up through the ranks.

Passionate about films and video games, Damien Mecheri joined the writers team of Gameplay RPG in 2004, writing several articles for the second special edition on the Final Fantasy saga. He continued his work with the team in another publication called Background, before continuing the online adventure in 2008 with the site Gameweb.fr. Since 2011, he has come aboard Third Éditions with Mehdi El Kanafi and Nicolas Courcier, the publisher’s two founders. Damien is also the author of the book Video Game Music: a History of Gaming Music. For Third Éditions, he is actively working on the “Level Up” and “Année jeu vidéo” collections. He has also written or co-written several works from the same publisher: The Legend of Final Fantasy X, Welcome to Silent Hill: a journey into Hell, The Works of Fumito Ueda: a Different Perspective on Video Games and, of course, the first volume of Dark Souls: Beyond the Grave.

Curious by nature, a dreamer against the grain and a chronic ranter, Sylvain Romieu is also a passionate traveler of the real and the unreal, the world and the virtual universes, always in search of enriching discoveries and varied cultures. A developer by trade, he took up his modest pen several years ago to study the characteristics and richness of the marvelously creative world of video games. He writes for a French video game site called Chroniques-Ludiques, particularly on the topic of RPGs, his preferred genre.