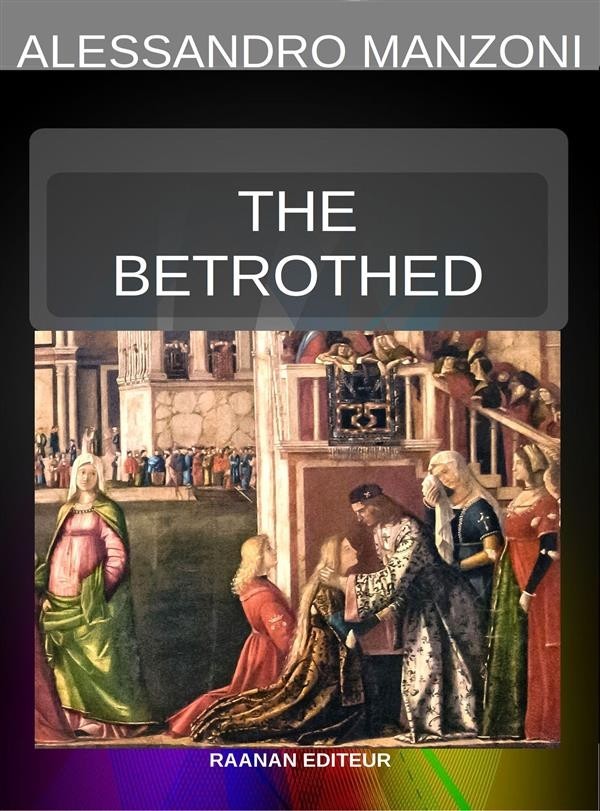 The Betrothed (Italian: I promessi sposi) is an Italian historical novel by Alessandro Manzoni, first published in 1827, in three volumes, and significantly revised and rewritten until the definitive version published between 1840 and 1842. It has been called the most famous and widely read novel in the Italian language.
The novel deals with a variety of themes, from the illusory nature of political power to the inherent injustice of any legal system; from the cowardly, hypocritical nature of one prelate (the parish priest don Abbondio) and the heroic sainthood of other priests (the friar Padre Cristoforo, the cardinal Federico Borromeo), to the unwavering strength of love (the relationship between Renzo and Lucia, and their struggle to finally meet again and be married). The novel is renowned for offering keen insights into the meanderings of the human mind.
|Wikipédia|

Extrait
|CHAPTER I
That branch of the Lake of Como, which turns toward the south between two unbroken chains of mountains, presenting to the eye a succession of bays and gulfs, formed by their jutting and retiring ridges, suddenly contracts itself between a headland to the right and an extended sloping bank on the left, and assumes the flow and appearance of a river. The bridge by which the two shores are here united, appears to render the transformation more apparent, and marks the point at which the lake ceases, and the Adda recommences, to resume, however, the name of Lake where the again receding banks allow the water to expand itself anew into bays and gulfs. The bank, formed by the deposit of three large mountain streams, descends from the bases of two contiguous mountains, the one called St. Martin, the other by a Lombard name, Resegone, from its long line of summits, which in truth give it the appearance of a saw; so that there is no one who would not at first sight, especially viewing it in front, from the ramparts of Milan that face the north, at once distinguish it in all that extensive range from other mountains of less name and more ordinary form. The bank, for a considerable distance, rises with a gentle and continual ascent, then breaks into hills and hollows, rugged or level land, according to the formation of the mountain rocks, and the action of the floods. Its extreme border, intersected by the mountain torrents, is composed almost entirely of sand and pebbles; the other parts of fields and vineyards, scattered farms, country seats, and villages, with here and there a wood which extends up the mountain side. Lecco, the largest of these villages, and which gives its name to the district, is situated at no great distance from the bridge, upon the margin of the lake; nay, often, at the rising of the waters, is partly embosomed within the lake itself; a large town at the present day, and likely soon to become a city...|