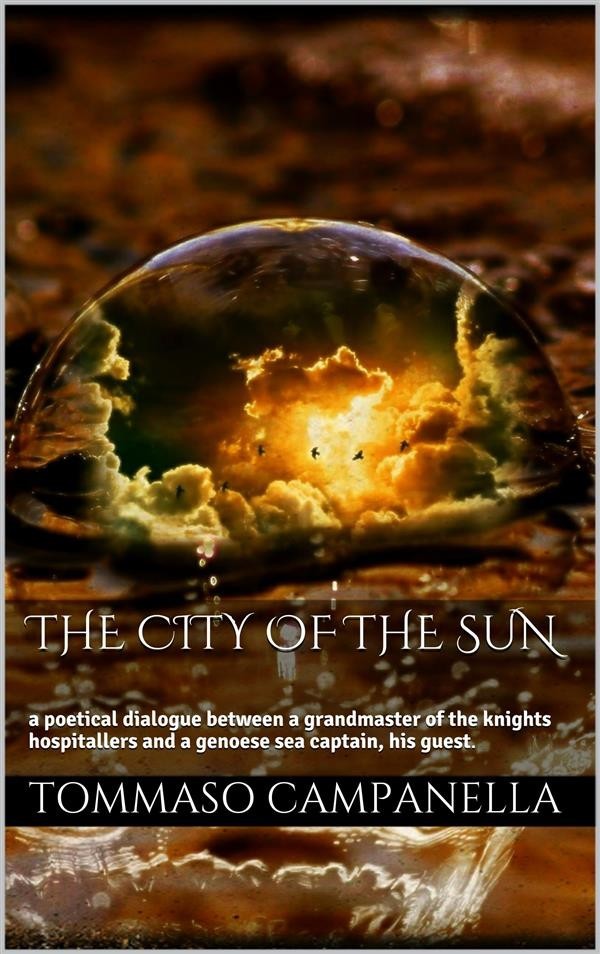 "G.M. Prithee, now, tell me what happened to you during that voyage?
Capt. I have already told you how I wandered over the whole earth. In the course of my journeying I came to Taprobane, and was compelled to go ashore at a place, where through fear of the inhabitants I remained in a wood. When I stepped out of this I found myself on a large plain immediately under the equator.
G.M. And what befell you here?
Capt. I came upon a large crowd of men and armed women, many of whom did not understand our language, and they conducted me forthwith to the City of the Sun.
G.M. Tell me after what plan this city is built and how it is governed.
Capt. The greater part of the city is built upon a high hill, which rises from an extensive plain, but several of its circles extend for some distance beyond the base of the hill, which is of such a size that the diameter of the city is upward of two miles, so that its circumference becomes about seven. On account of the humped shape of the mountain, however, the diameter of the city is really more than if it were built on a plain.
It is divided into seven rings or huge circles named from the seven planets, and the way from one to the other of these is by four streets and through four gates, that look toward the four points of the compass. Furthermore, it is so built that if the first circle were stormed, it would of necessity entail a double amount of energy to storm the second; still more to storm the third; and in each succeeding case the strength and energy would have to be doubled; so that he who wishes to capture that city must, as it were, storm it seven times. For my own part, however, I think that not even the first wall could be occupied, so thick are the earthworks and so well fortified is it with breastworks, towers, guns, and ditches..."