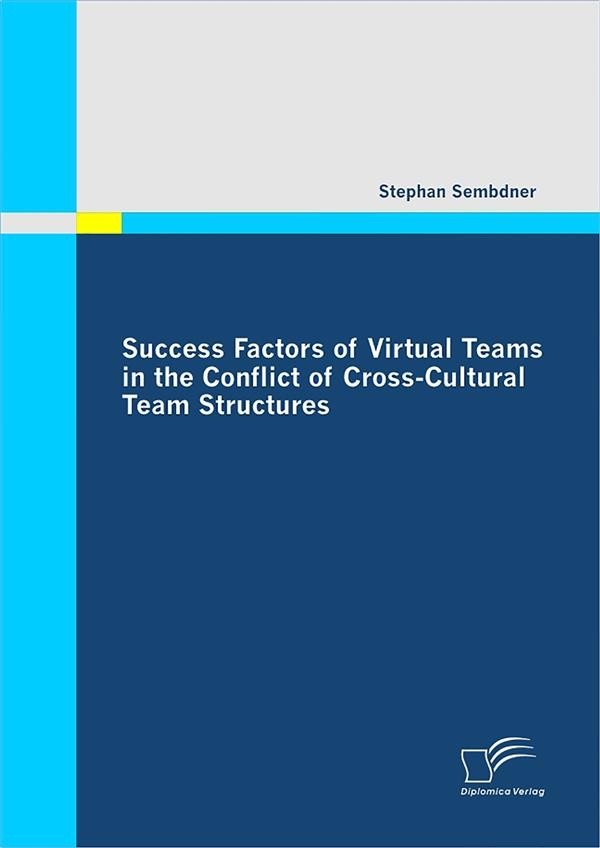 Due to strong competition and to the most recent market requirements, more and more enterprises or organisations have to realign their business activities in a new way to cope with the current economic situation. In the respective organisational structures, specific changes have to be made to manufacture the products and to provide relevant services more effectively. Moreover, services are often provided increasingly no longer from a centralised location. For this reason, decentralised teams in various locations have developed, working together to jointly reach the targets.<br/>So overall, organisations are facing new challenges to a growing extent. On the one hand, they have to cope with customers from different cultural areas, and on the other hand, the structure of the employees is changing simultaneously. The organisations have international departments or not. The trend is now clearly towards heterogeneous team structures. Consequently, it is crucial for the organisations to be successful in spite of generally tougher market conditions. And this operational success will not come about automatically but will require well-functioning, efficient teams.<br/>A general overview will be given on the central subject matter, and simultaneously, basic concepts will be initially presented.<br/>The second chapter deals with the topic of team and team work. Starting with the central topic’s partial aspect ‘virtual team’, the term ‘team’ will be defined and examined more in detail. In this context, first a historical review and the development of the terms will be provided. And hereby a distinct differentiation is made between the individual terms. Additionally, the transition from the (customary) team to the virtual team and its particular characteristics will also be emphasised.<br/>A further relevant aspect of the central subject matter is in particular the term ‘cross-cultural’. It refers above of all to the general topic of culture, and this will be in the focus of the third chapter. The goal here is to describe the fundamentals of culture, and the factors on which culture is built on. Another emphasis is on the models explained in the specialised literature. <br/>The fourth chapter deals with the central topic of success factors. They are to be described and analysed here which contribute significantly to the success of a virtual team. For this purpose, for each success factor a definition is to be provided and the respective significance will be emphasised. The intercultural context is also a major focus. In the specialised literature, a wide range of factors have been described. The selection of such factors, which are to be considered, result from the findings of research work in the area of specialised literature and are at the same time closely linked to the author’s previous job experiences. Consequently, the work in relation to this book and the findings are of particular importance for the author.<br/>Chapter five is to meet the requirements regarding the evaluation of the theoretical findings based on practical experience. As the factors to be analysed have not yet been finally determined, a quantitative analysis cannot be made here. This would require a more comprehensive analysis or survey with a corresponding time frame, with the aim to get complex data material and figures serving as a basis for empirical analysis and evaluation. The basis for the analysis will be the practice-oriented experiences of experts which have been gained through interviews. <br/>At the end of chapter five, general statements from experts will be the basis for the final evaluation.<br/>In chapter six, major results from the previous chapters’ will be given. Furthermore, the findings of chapter four will be contrasted with the general statements obtained from the interviews listed in chapter five. Based on the hereof resulting final consequences, recommendations for further focal areas of research and analyses will also be given.