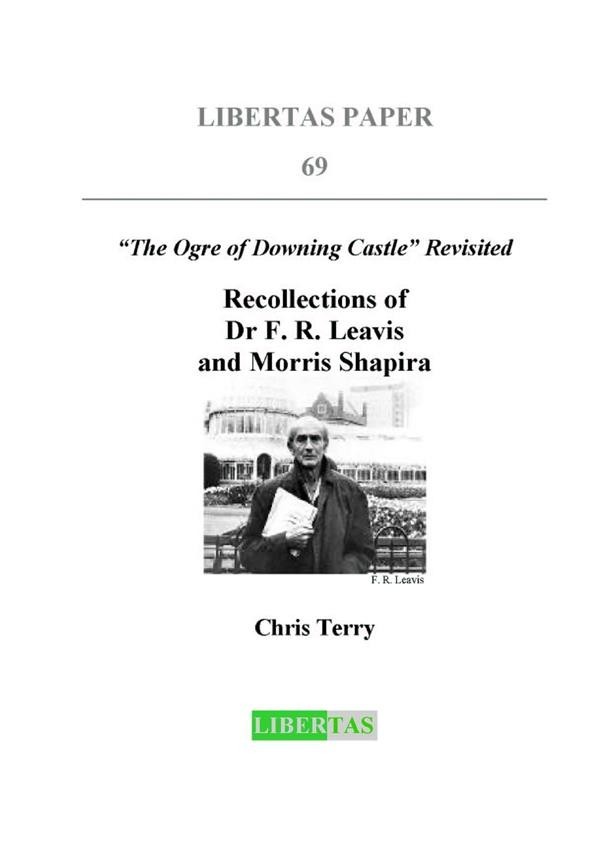 Reflections on Dr Leavis, the Downing School of English, and Morris Shapira by a Leavis
pupil of the closing years of Leavis’s time at Downing. More a memoir than a study, it takes
letters received from Dr Leavis and one from Q. D. Leavis as the anchors for a story about
the turbulences of that time as experienced by an undergraduate but recollected in
retrospect.
It considers the proposed reasons, causes of damage done, the nature of a single incident,
the framework of a search for healing. One issue is that of “pastoral care" for undergraduate
and former students. It is also about proximity to a national icon and the dynamics of
teaching or learning in that context. It sketches a personal link to Dr Leavis, its privileges and
its pitfalls, its emotional liability, while re-affirming or re-discovering the integrity and the
necessity of Leavis' creative achievement in searching for a constant celebration of creative
life sustaining values in the flux of the modern world after 1918.
Simultaneously, it regrets the frantic debates and wounding squabbles within the Downing
School from about 1963 onwards which denied the values the Downing experience sought to
establish. It is argued that this was, in part, made inevitable by a cult building up around "the
great man" in the search for security in the latter years which created both zealots and
revisionists to their own detriment. Respect transformed into discipleship - a form of distance
- and this into a form of dependence requiring revolt. In the process damage was done to the
cause, to individuals around it, and to figures in the Diaspora.
Based on letters received from Dr Leavis and one from Mrs. Leavis, the account speculates
about the outlines of the crisis as it affected Dr Leavis and documents both his immersion in
it and his emergence from it at a personal level.
Another element considered is the energy released by the clash of adolescence, middle age,
and old age (student aspirants, acolyte teachers, the Master) - the generations in conflict in
the confined world of Cambridge. In this context the difficulties faced by the administrative
body at Downing College concerned with winding down a whole era of teaching are taken
into account: the task of finding a successor for a great, active and controversial figure in
fairness and with harmony.
At yet another level it is about looking for and finding doorways into the past and meeting
friends on the other side.
And, finally, it includes a positive memory of Morris Shapira, Director of Studies as of 1963,
whose teaching was unique, selfless and effective during his Downing years. He is portrayed
here as a victim of the process of post-Leavisian dénouement at Downing College.