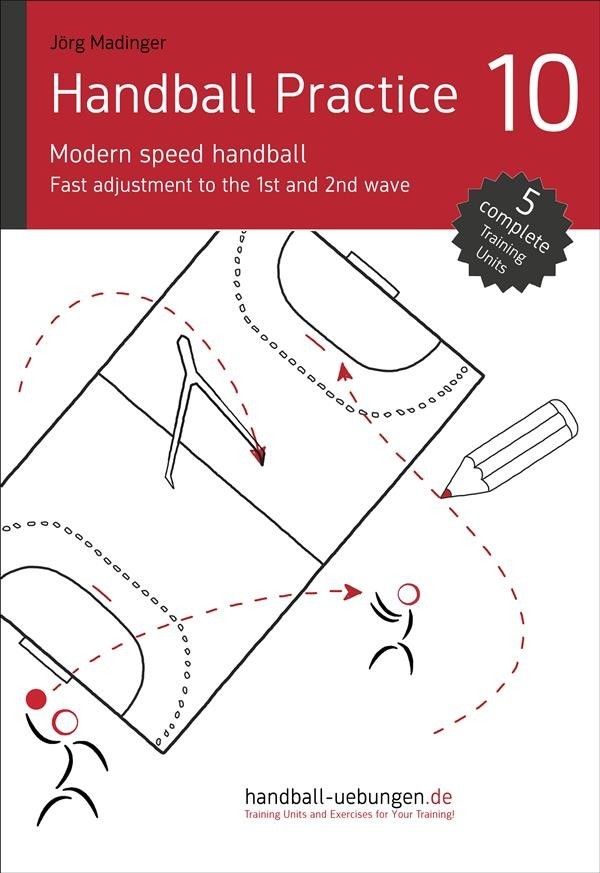 Dear reader
Thank you for choosing a book of the handball-uebungen.de training guide series.

Fast breaks are an important factor for successful handball game outcomes in modern handball. Further positive aspects include motivation of the team through quick goals in connection with demoralization of the opposing team as well as improvement of the attractiveness of the handball game itself. Quick adjustment from defense to offense play after winning the ball (or after a fast throw-off following a goal) in order to take advantage of the off-guard situation and score a goal through increased speed of play is the central objective of speed play with fast breaks.

From winning the ball and
- quickly adjusting from defense to offense play
- to initiating the first or subsequent second wave
- and a well-structured action following the second wave
- or the fast throw-off
all these fast break elements are dealt with during the following five training units.

The first two units focus on fast break initiation and the improvement of passing precision and passing decisions for a first wave as well as carrying the ball forward after gaining ball possession. The third unit focuses on the decision-making process in outnumbered situations that may be created during the first or second wave, whereas the last two units practice well-structured playing against an off-guard and passively acting defense formation.

With these five training units, the collection offers ideas and incentives for practicing the individual fast break phases and provides the opportunity to implement a comprehensive concept that involves both the first and second wave and the fast throw-off.

This book contains the following training units:
TU 1 – Improving passing precision when initiating the first wave
The objective of this training unit is to improve running paths, passing and the decision-making process during the first wave. After a warm-up running exercise, the subsequent short game already includes quick adjustment exercises and long passes. During the ball familiarization phase and the goalkeeper warm-up shooting, the players practice playing long passes before they combine several actions with first wave initiation in a series of shots. The closing small group exercises finally focus on making passing decisions.

TU 2 – Quick adjustment to a fast break after a defense action ( )
The objective of this training unit is to practice the quick adjustment from defense play to fast break initiation. Following the warm-up phase with a coordination run exercise and the ball familiarization phase, the goalkeeper warm-up shooting combines a preparatory defense exercise and a series of shots for the goalkeeper. During the two subsequent defense exercises, the players practice quick adjustment from defense work to fast break countermovement. A 4-on-4 game and a sprint contest complete this training unit.

TU 3 – Improving speed play for fast break situations
The objective of this training unit is to improve free play in fast break situations. Following warm-up and a short game, the players play long passes during the ball familiarization phase which will be further developed in the goalkeeper warm-up shooting exercise. This is followed by a series of shots requiring precise passes. Afterwards, the players practice free play in outnumbered, open situations during fast breaks. A closing game with gradually increasing complexity completes this training unit.

TU 4 – Developing a well-structured second wave by implementing long crossing moves and options for further playing
The objective of this training unit is to develop a long crossing during the second wave. Following a warm-up running exercise, a short game, and a ball familiarization exercise, the players initially develop the long crossing during the goalkeeper warm-up shooting phase. In the subsequent series of shots which will be combined with a 1-on-0 fast break, the players practice the long crossing with compensation of the center back player. Defense players and the pivot are added for the two subsequent small group exercises, before the players implement the course 4-on-4 during the closing part of the training unit.

TU 5 – Step-by-step development of initial actions after a fast throw-off
The objective of this training unit is to develop a simple initial action after a fast throw-off. Following warm-up and a coordination run exercise, the players practice the basics during the ball familiarization phase and the goalkeeper warm-up shooting. During the three subsequent exercises, the players further develop the running and passing paths and eventually combine them in order to create an initial action. In the closing game, the players implement what they practiced before.