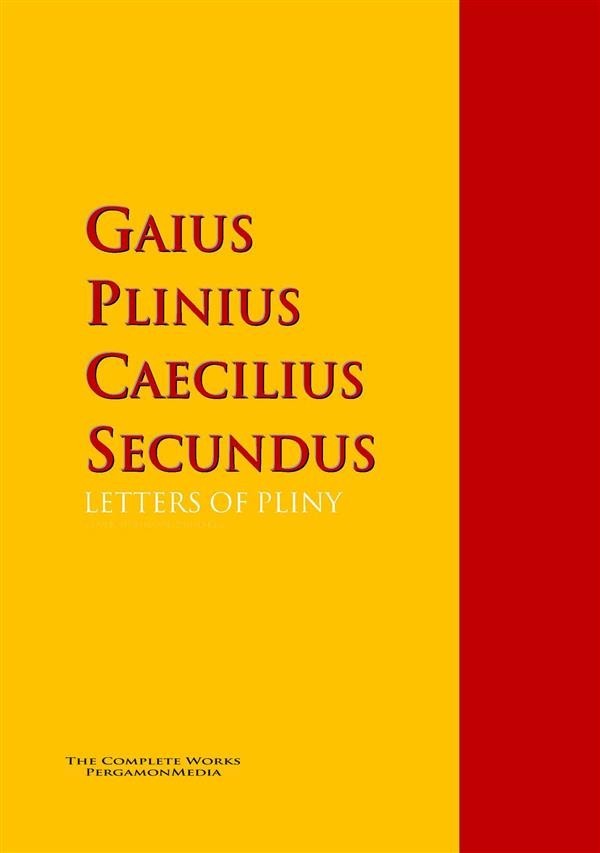 GAIUS PLINIUS CAECILIUS SECUNDUS, usually known as Pliny the Younger, was born at Como in 62 A. D. He was only eight years old when his father Caecilius died, and he was adopted by his uncle, the elder Pliny, author of the Natural History. He was carefully educated, studying rhetoric under Quintilian and other famous teachers, and he became the most eloquent pleader of his time. In this and in much else he imitated Cicero, who had by this time come to be the recognized master of Latin style. While still young he served as military tribune in Syria, but he does not seem to have taken zealously to a soldier's life. On his return he entered politics under the Emperor Domitian; and in the year 100 A. D. was appointed consul by Trajan and admitted to confidential intercourse with that emperor. Later while he was governor of Bithynia, he was in the habit of submitting every point of policy to his master, and the correspondence between Trajan and him, which forms the last part of the present selection, is of a high degree of interest, both on account of the subjects discussed and for the light thrown on the characters of the two men. He is supposed to have died about 113 A. D. Pliny's speeches are now lost, with the exception of one, a panegyric on Trajan delivered in thanksgiving for the consulate. This, though diffuse and somewhat too complimentary for modern taste, became a model for this kind of composition. The others were mostly of two classes, forensic and political, many of the latter being, like Cicero's speech against Verres, impeachments of provincial governors for cruelty and extortion toward their subjects. In these, as in his public activities in general, he appears as a man of public spirit and integrity; and in his relations with his native town he was a thoughtful and munificent benefactor.
The letters, on which to-day his fame mainly rests, were largely written with a view to publication, and were arranged by Pliny himself. They thus lack the spontaneity of Cicero's impulsive utterances, but to most modern readers who are not special students of Roman history they are even more interesting. They deal with a great variety of subjects: the description of a Roman villa; the charms of country life; the reluctance of people to attend author's readings and to listen when they were present; a dinner party; legacy-hunting in ancient Rome; the acquisition of a piece of statuary; his love for his young wife; ghost stories; floating islands, a tame dolphin, and other marvels. But by far the best known are those describing the great eruption of Vesuvius in which his uncle perished, a martyr to scientific curiosity, and the letter to Trajan on his attempts to suppress Christianity in Bithynia, with Trajan's reply approving his policy. Taken altogether, these letters give an absorbingly vivid picture of the days of the early empire, and of the interests of a cultivated Roman gentleman of wealth. Occasionally, as in the last letters referred to, they deal with important historical events; but their chief value is in bringing before us, in somewhat the same manner as "The Spectator" pictures the England of the age of Anne, the life of a time which is not so unlike our own as its distance in years might indicate. And in this time by no means the least interesting figure is that of the letter-writer himself, with his vanity and self-importance, his sensibility and generous affection? his pedantry and his loyalty.