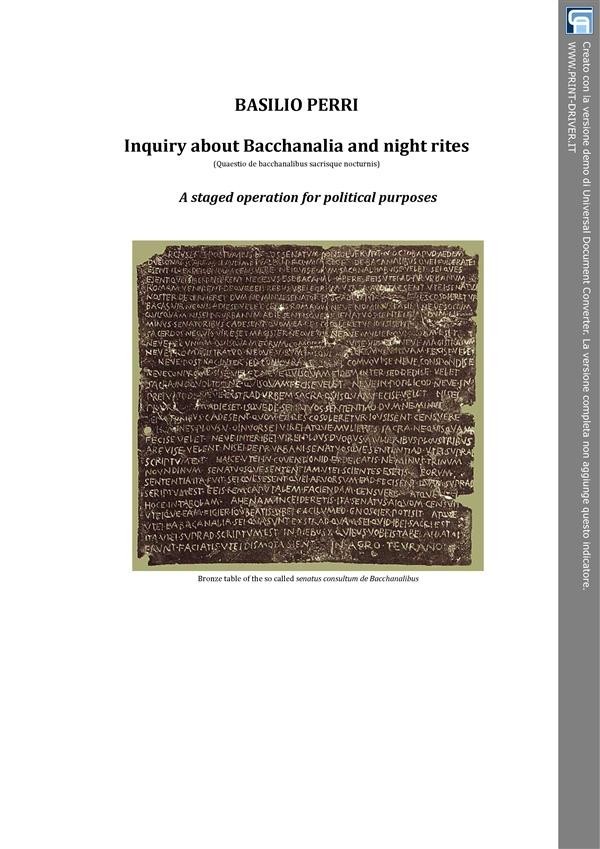 This book begins with an introduction of a methodological nature. In it, we try to explain why on the bacchanalian affair have been accumulated so many errors, which over time have become absolute truth. Follow nine assays, in which are examined some of the most debated issues of the Bacchanalian affair. These are designed to do a bit of clarity on this complicated matter. The topics discussed in the essays are as follows: 1) The Bacchanalian affair We look back critically the history of the persecution of followers of Bacchus as it is described by Livy. 2) Comment of edict This is a review of contents. From these emerges that the purpose of the edict is in no way to eliminate the cult. The followers of Bacchus, if they observed the directives of the authorities, could continue to worship their god as they had always done. 3) The Bacchanalia and the Allies: a modern fiction We show in this paper that the allies of the Romans were never involved in the events of 186 and the Bacchanalian affair was simply a tool of Roman internal political struggle. The conservatives and senatorial class utilized the affair to seize power. 4) The causes of persecution The real reasons that really pushed the political class in power to make a bloody persecution of the followers of the cult of Bacchus were, as in all religious persecutions that took place in the course of history, essentially political. 5) Livy and the Dionysian cult in Rome In our analysis, we compared the news on the cult of Bacchus provided by Livy with other existing sources on the Bacchic religion. From this comparison it turns out that the novelties of the Roman cult were an invention out of whole cloth. 6) Dionysus / Bacchus and the Roman religion In the first part, this paper tries to outline the best known features of this deity particularly complex. The second part describes the spread of the cult of Bacchus in Rome long before the affair, even if the god in Rome is called Liber 7) A consular regulatory edict In this short paper, we show that the senators, in agreement with the consuls, used unlawfully the procedure for the edicts to approve legal rules on Bacchanalia. 8) On syntax errors supposed by Fraenkel An accurate analysis of the syntax of the last part (ll. 22-30) shows that there are no the syntax errors hypothesized by Frenkel. 9) Teurani were not Roman allies Ager Teuranus became ager pubblicus after the end of the Second Punic War. Almost certainly it was under the jurisdiction of a prefect sent from Rome. Teurani were not Italic allies.