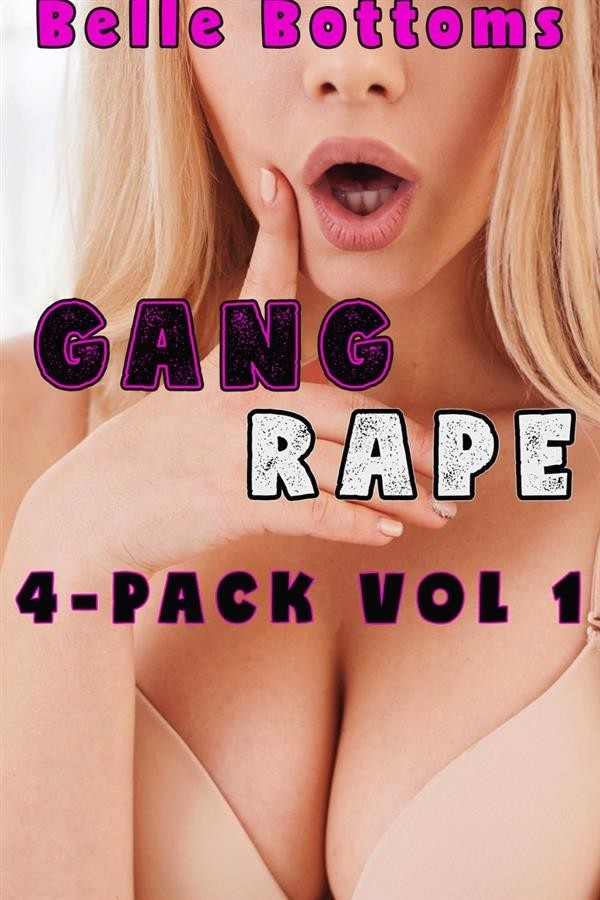 Four different girls find themselves in 4 very bad situations. They are overpowered and raped repeatedly by men who just want to use them and throw them away. This 4-pack includes: Gang-raped by My Professors (also published in a slightly different, softcore format under Gangbanged by My Professors by Jade Summers) Gang-raped by the Fraternity (also published under Drugged and Used by the Fraternity by Jade Summers) Gang-raped by the Police Force (also published under Taken at the Police Station by Jackie McNab) Gang-raped in the Biker Bar (also published under Biker Bar Gangbang by Jade Summers) These stories contain forced sex, forced anal, and forced deep throat. Excerpt from Gang-raped by the Police Force: "Go get the captain," one of the men said. I stood in the room with the two cops and the bright florescent overhead lights were switched on. I wanted to hide myself somewhere but there was nowhere to go. There was just a long, thin table and some chairs in the room. Some of the men from the hall slowly filed into the room and I started to cry again. "Please … Please let me go. Let me fix my dress." "We already fixed your dress. I think it looks pretty good." All of the men in the room laughed and the grinning cop moved up so that he was standing in front of me. He reached up and pinched my hard nipples through the fabric, then slowly peeled stretchy fabric back over each breast. They jiggled a bit as they were set free from the bra and it looked like the cop was starting to drool as he stared at them. He grabbed each one of them in his hands and squeezed and kneaded them, pressing them up and letting them fall, then picking them up again in his hands. "God these things are huge!" I could see his cock getting harder and harder inside his pants and after pawing at my breasts for a while longer he let them fall down and watched them jiggle some more. Then and he unzipped his pants and pulled his cock out. It wasn't long but it was incredibly thick. Thicker than anything I'd ever seen. "Open your mouth," he said as he grabbed my hair. "And you know what gonna happen to you if I feel any teeth." He tightened his grip on my hair and I screamed out, but I knew what he meant. I knew he was telling me not to bite his cock. He put both hands on my head and push me down so that I was bent over and my lips were touching the enormous, smooth head. "I said, open your mouth." As I did what he told me to do I felt the giant head push past my lips. I could barely open my mouth wide enough to fit it in, but he helped by pushing the back of my head down. Then he moved my head up and down over the shaft as he thrust himself deep inside my mouth. Excerpt from Gang-raped in the Biker Bar: "Would it be possible to use the ladies room?" I asked the bartender. "Sure, sweet thing. But it's gonna cost you," he said with a grin. "Well, I'm on my way home. I got kind of lost trying to find the subway and I really just need to pee and get directions if that's okay." "The bartender looked at the other guys that were sitting at the bar and gave them a funny look. "No problem. It's the second door at the end of the hall there down." I smiled at him and headed in the direction that he pointed. I just wanted to use the bathroom and get out of there as quickly as possible. I didn't think that I was in any danger but I really didn't like the way the bartender looked at the guys sitting at the bar. When I left the bathroom it seemed like there were a few more guys crowded around the bar. They were all huge. Tall and burly with beards and leather jackets and as I approached them I had to squeeze through a few of them to get past the bar. But every guy I passed didn't budge when I said excuse me. They just stayed where they were standing and let my body brush up against theirs. Suddenly it felt like they were all crowding around me and one guy who was kind of scary looking stood right in my path and wouldn't move. "Excuse me, please, I just need to get by." "Where are you headed so quick, little girl? Stay and have a drink with us. We won't bite," he said with a laugh as the rest of the men who were surrounding me joined in. "No, I really just want to get home." But as I spoke I felt one of the men come up behind me. He lifted my the skirt of my dress up and pulled my ass backward so that it was pressed up against his jeans. I could feel his hard cock pressing into the space between my ass cheeks. "Hey!" I said as I twisted to look at the guy behind me. But as soon as I did the man who was blocking my way in front of me grabbed the top of my dress and pulled it down and my boobs popped out. I had a bra on but it was really low-cut, so that it didn't show under the dress, and barely covered my breasts. The man behind me pulled my dress all the way down to the floor and pulled my arms behind me, then the man in front of me undid the front clasp on my bra. My breasts spilled out and the man in front of me grabbed both of them in his hands and squeezed them hard.