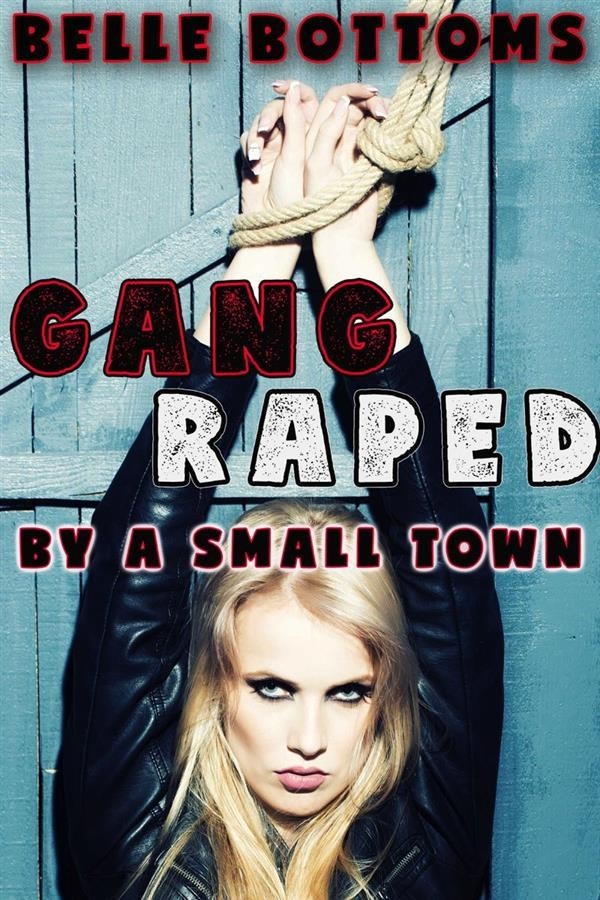 On her way home for Christmas break, Tina gets pulled over by some small-town cops. She can’t afford to pay for a ticket and these two decide to take her down to the station to see if they can figure something out. Tina gets a double penetration ride on a horse she will never forget before she is put in a stockade in front of the whole town and raped repeatedly in the mouth, pussy and asshole by dozens of men. Author's Note: Gang Raped by a Small Town is also published in a slightly more softcore format under the title Taken by a Small Town by Jackie McNab Excerpt: "You won't be needing these," he said with a laugh. “Now put your left foot in the stirrup." I did what he said and felt his fingers slide up inside my pussy as he pushed me up and onto the horse. "Whoa, she's already nice and wet," he said to the cop who was up on the horse. When I got up to where I was standing on the stirrup I noticed that the front part of the saddle where you held on, the horn, was different. I’d been horseback riding before and I alway remembered that part was short and curled forward, like a handle. But the horn on this saddle was long and thick. It looked like a big dildo jutting straight up out of the front of the saddle. I looked up at the cop with wide eyes. “Now you just swing that leg of yours over the saddle and set yourself down right here," the cop said as he patted the dildo-shaped horn. "You’ve got to be kidding! You expect me to ride on that thing?" I said as I gawked at him. "I expect you to ride on both of these things," he said as he wagged his cock at me. "Come on, get that leg over." I did as he told me, I put my leg over the back of the horse, but because my legs were so short I was barely on the saddle. I felt's the cop lift me up from behind, then sit me down on the dildo. I screamed as I slid down the thick, leather pole. It was much thicker and longer than anything that ever had inside me, which was only a small vibrator I’d kept hidden in my room throughout the my last couple of years of high school. Next I felt the cops cock head pressing against my sensitive asshole and I screamed as I felt it enter me. "No! I've never had anything in there! Please, stop!” But he wasn't listening. He grunted as he forced his cock into my asshole then scooted forward so that he was underneath me. I screamed again as I slid all the way down onto the cops lap with the two enormous things inside me. "I'll drive on ahead and wait for you outside the station. I can't wait to see the two of you ride up," the cop on the ground said with a big smile. As soon as the car pulled away the cop behind me made a noise and the horse started trotting down the country road. With each step the horse took my body was thrown a couple inches into the air, then slammed back down on to the cock in my ass in the dildo in my pussy.