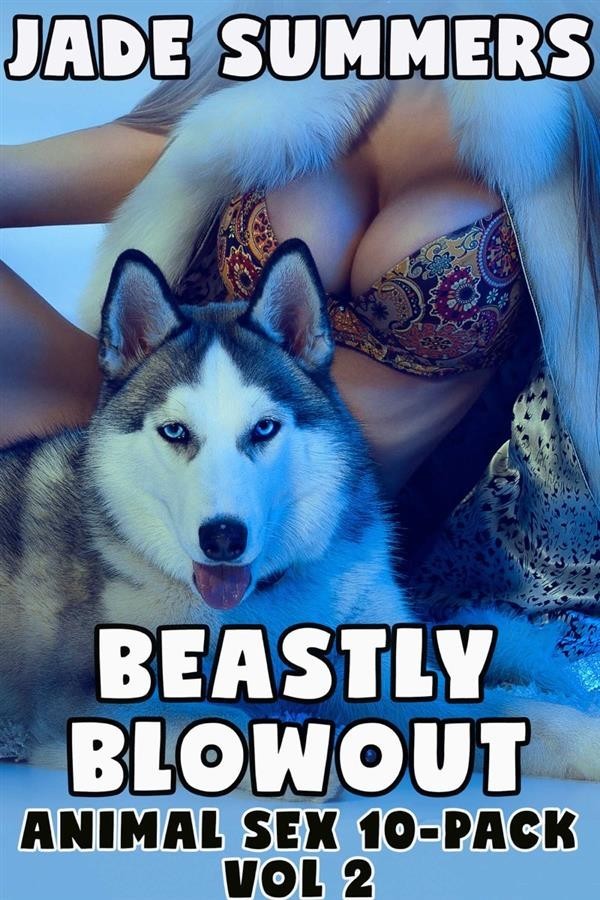 This ten-pack picks up after Beastly Blowout 10-Pack Vol. 1 and there are no overlapping stories. So if you already own that bundle, this one is for you!

Check out the sample for a super naughty excerpt!

The 10 stories in this bundle include:

Excerpt:
From My Dog Turned Me Into a Puppy Farm:

I felt his cold, wet nose is it examined my asshole and my pussy, sniffing and licking up my pussy juices. Then I felt his warm, soft tongue move in an out of my folds and as he forced it in and out of my pussy. I wiggled my ass in the air and gyrated my hips as Jonesy's tongue dove into me. I could feel his soft fur rubbing up against my thighs as he pressed his nose and mouth as far into my pussy as he could.
Not long after that Jonesy mounted me, his strong paws holding me down as they dug into my back. I felt the head of his enormous cock as it pushed into my opening, then I screamed out as the thick head forced its way into me. With each thrust his cock moved deeper and deeper into me until it was slamming into my cervix. I screamed as my pussy was being filled up by my dog's enormous cock.
But then the feeling of fullness became more intense. I felt his cock growing larger inside of me. I had never experienced a sensation like it before in my life. With each thrust his cock seemed to grow larger and larger, like a balloon was being blown up inside my pussy. I could feel that his cock was so large that there was no way that he would be able to pull it out and it was then that I realized that he was knotting inside of me.

From Falling for the Stallion:

When I graduated from high school, my uncle let me work on his farm so I moved up there and was around Lance every day and night. It was magical, but there was a part of me that always felt that something was missing. I never told anyone about my fantasies … any human, that is. In the evenings I would stand next to Lance and whisper my fantasies into his ear and would rest my head on his until I would practically fall asleep standing up. I know it’s crazy, but I really felt like he understood what I was telling him.
One night when I was brushing his mane, Lance started stomping and acting nervous. I kept talking to him in a soothing voice, but everything I did seemed to make him more agitated. Finally, I looked down and saw what the problem was. Lance was in heat and his two foot long cock was unsheathed and was sticking out underneath him. I was in shock. I’d dreamt of this moment my whole life, and now that I was in the presence of a massive horse cock, I wasn’t sure what to do.
I decided to use this opportunity to explore, so I got down on my knees and touched the tip of his cock with my fingers. A deep sound came from Lance and his agitation stopped, so I was sure this was what he was trying to communicate. He just had no way of telling me.
I wrapped my hands around the enormous head, then moved them down the shaft and felt Lance thrusting into me gently. When both of my hands were moving slowly up and down the shaft, I touched my tongue to the head of his cock. It was soft and salty and I loved it. It was way too big for me to put my mouth around, so I ran my lips and tongue around the head while I continued to move my hands up and down the shaft. It wasn’t long at all before Lance’s cock grew even larger and more rigid.