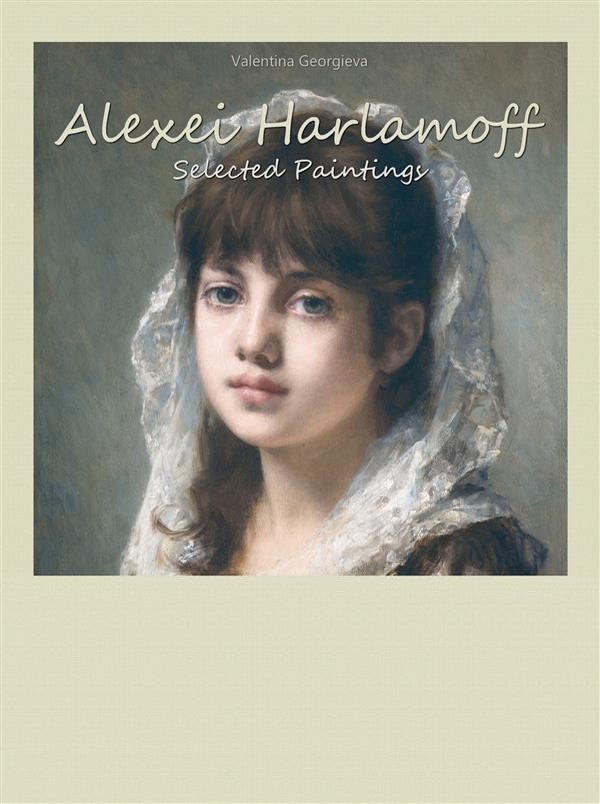 Alexei Alexeievich Harlamoff (1840–1925) was a Russian painter. Harlamoff became a guest student at the Imperial Academy of Arts in Saint Petersburg in 1854. Three years later he was awarded a second class silver medal for a drawing. In 1865 he presented his large scale painting Ananias before the Apostles, but did not win the competition for a second class gold medal.
In 1870 Tsarina Maria Alexandrovna bought one of Harlamoff's paintings. In April he sent his first letter from Paris to Saint Petersburg. He spent September and October of that year in Normandy and the southern Netherlands with Alexey Bogolyubov, C. Huhn, and A. Lavezzari. He also travelled to Brussels and to London, where he visited an exhibition of Old Masters. In November the Academy of Arts commissioned him to copy Rembrandt’s Anatomy Lesson of Dr. Tulp, and he stayed in The Hague.
He was awarded a bronze medal at the Vienna Universal Exhibition.
In January 1875 Harlamoff completed a portrait of Elena Tretyakova in an evening dress. He began a portrait of Turgenev, which he finished in December. During this period he also accepted other commissions, and may have spent March in Spain.
In May 1875 he exhibited at the Salon, where the portraits of Pauline Viardot-Garcia and Louis Viardot drew the attention of the Parisian press. He moved into the studio of the late Isidore Pils at Place Pigalle 11. During this year he was beginning to gain popularity with British art dealers. At New Years and the beginning of 1876 he visited Russia.
Harlamoff joined the Society for Art Exhibitions at the Imperial Academy of Arts, in May he exhibited the portraits of Turgenev and Alphonse Daudet at the Salon.
On 28 November 1877 Harlamoff became a founding member of the Association of Russian Artists for the Mutual Support and Benefaction Abroad. In 1878 Harlamoff exhibited his paintings at the Salon and at the Universal Exhibition in Paris simultaneously.
Through 1881 and 1882 Harlamoff exhibited three paintings at the All-Russian Exhibition Centre in Moscow.
In 1888, on Bogolyubov's suggestion, Vladimir Stasov exhibited Harlamoff’s portrait of Turgenev at an Itinerant Art Exhibition. He was also exhibited at the International Exhibition in Glasgow, where Queen Victoria was reportedly impressed by his paintings. The next year Harlamoff joined the organizing committee of the Universal Exhibition in Paris, where he showed eleven of his paintings that year.
In 1891 Harlamoff organized the 50-year jubilee of Bogoliubov’s activity. At the 19th Itinerant Art Exhibition in Saint Petersburg Tsarina Maria Fedorovna purchased his painting Portrait of a Young Girl. When Bogolyubov died in 1896 Harlamoff was nominated chairman of the Association of Russian Artists for the Mutual Support and Benefaction with its seat in Paris. In 1900 Harlamoff was appointed Chevalier of the Legion of Honour.
In 1909 Harlamoff moved to his new studio, Boulevard de Rochechouart, 57bis. Between 1911 and 1914 Harlamoff participated in exhibitions with Galerie Lemercier in Moscow. Harlamoff died on 10 April 1925 in his studio on Boulevard de Rochechouart with Litvinne as his sole heir.