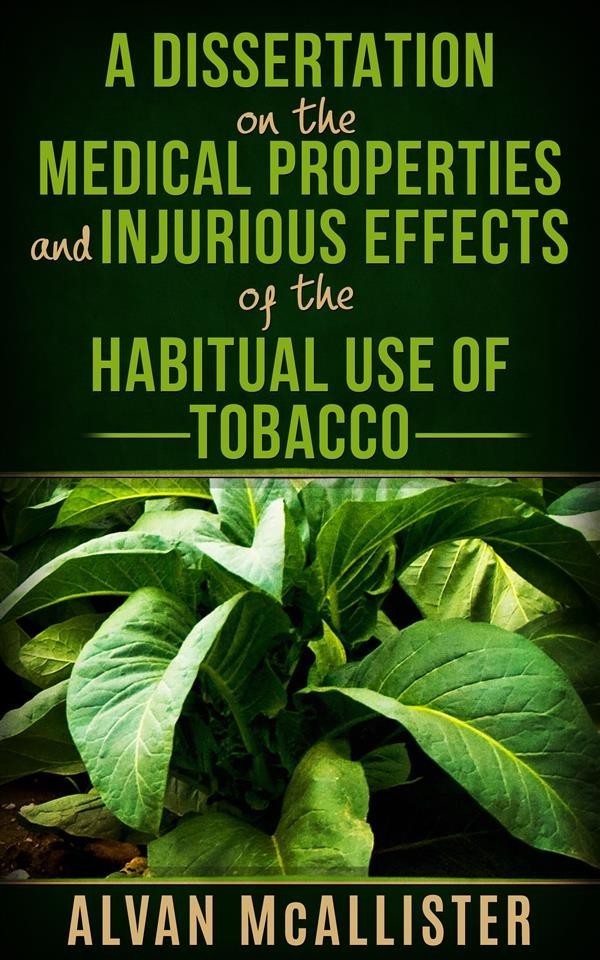 In consenting to the publication of the following pages, the author yielded to the request of gentlemen whose opinions he did not feel at liberty to disregard; he therefore hopes toavoid the imputation of vanity, with which he might have been charged, had he obtruded himself on the attention of the public, unsolicited. That the habitual use of tobacco is a wide spread, and spreading evil, will be acknowledged by all. This has been felt for years by the most enlightened members of the Faculty. That it causes many diseases, particularly visceral obstructions, and renders many others exceedingly difficult to cure, is demonstrated in the daily experience of every practitioner. The conviction that this habit was constantly extending by the advice and example of physicians, first induced the author to undertake the discussion of this subject before the respectable Society to which he has the honor to belong. Whether the attempt has been successful, the public will judge. That it is imperfect, will not be denied; but it is believed to have claims as a candid statement of facts.

To literary distinction the author makes no pretentions; he therefore craves the indulgence of the learned, as theycan best appreciate the labor of writing well. He has chosen a free, popular style, believing that the best calculated to do good; and to render it still more familiar, at the suggestion of some friends, the technical terms have been mostly expunged. Awarethat affectation consists no less in studiously avoiding, than in unnecessarily using technical language, the author submitted to this, in the hope of being better understood by persons out of the Profession. His medical brethren will, therefore, know howto excuse him, for attempting to make this essay more plain, though it should be at the expense of technical accuracy.

Should the prevalence of the practice, be a fair index to public sentiment, the author is aware that he wars against a fearful odds. Butmany who use this noxious weed, without hesitation acknowledge its deleterious effects, and urge in extenuation the inveteracy of habit.

One consideration had considerable influence to induce the author to consent to the publication of this paper--the hope that it might aid in putting away the evil of intemperance, by pointing out one grand source of that desolating scourge. When public attention shall be fully awakened to this subject, innumerable instances will be found, where drunkenness has followed asthe legitimate consequence of using tobacco.

Should that hope be fulfilled--should it be found that the labor of the author has exerted any salutary influence, in restraining young men from falling into those habits which areinevitably followed by much physical suffering, if not by absolute ruin, such a result would be to him an ample compensation.