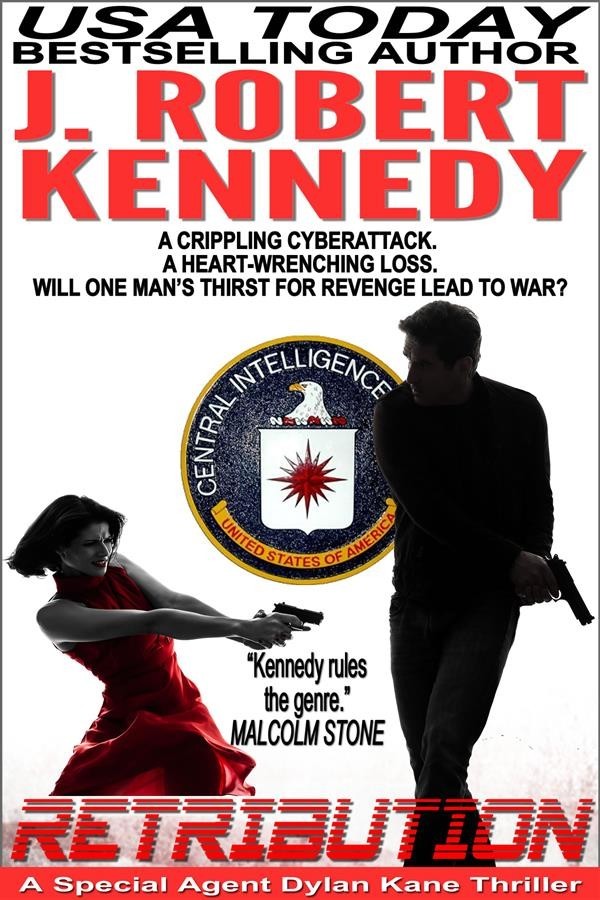 A CRIPPLING CYBERATTACK.
A HEART-WRENCHING LOSS.
WILL ONE MAN’S THIRST FOR REVENGE LEAD TO WAR?

Two years ago, cyber security specialist Clayton Hummel unknowingly betrayed his country for love, and today, billionaire Franklin Temple pays the price. Blinded by grief and rage, and dissatisfied with his government’s response, Temple uses his considerable wealth to take matters into his own hands, and bring justice to those responsible for the greatest cyberattack in history.

And his thirst for revenge may just lead us to war.

Join CIA Special Agent Dylan Kane and his team, as they race a grieving father to find those responsible for a ransomware attack that shut down hundreds of thousands of computers around the world, including those in one town, in one hospital, where one young, innocent patient died as a result.

From USA Today bestselling author J. Robert Kennedy comes another torn from the headlines thriller, Retribution, where he once again takes current events and twists them to his own end, delivering a taut action-packed page-turner certain to leave you wondering who to cheer for. Packed with heartache and pain, hope and romance, and enough thrilling action and laughter to satisfy any fan of the genre, Retribution delivers like only Kennedy can.

Reserve your copy now, and be among the first to read what might be tomorrow’s headlines!


WHAT READERS ARE SAYING ABOUT THE DYLAN KANE SERIES

“The action sequences are particularly well-written and exciting, without being overblown.”

“I love how the author explains what's needed but doesn't just ramble on in narrative.”

“The events in this adventure are so real and so heart pounding you can't put it down. Mr. Kennedy is by far my favorite writer.”

“Don’t mess with Kane, he takes no prisoners, especially when you target his friends.”

“This is one of the best stories I have ever read. The action and plot is believable and exciting and of course the climax is nail biting stuff. This author sure knows his stuff - if not, he does a great job of convincing his reader that he does!”

“Fast paced international spy thriller with good old American values among its main characters. I'd like to think we really do have agents like Kane.”