Knocked Up by Animals 3-Pack - Dogs and Gorillas Got Me Pregnant and Milked Me! 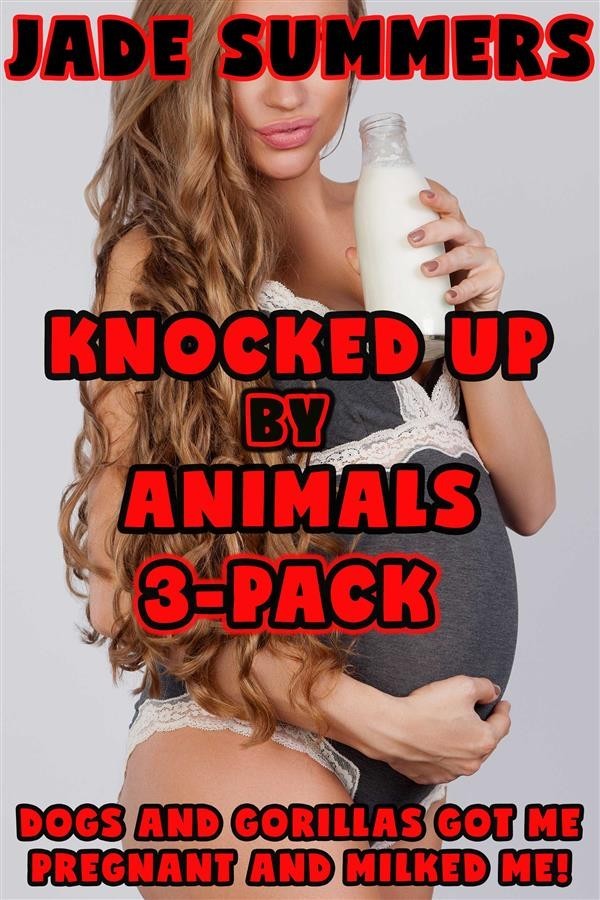 Knocked Up by Animals 3-Pack - Dogs and Gorillas Got Me Pregnant and Milked Me!

Three different women in three different, crazy situations! But the one thing they have in common? They're all hypnotized by animals to do the impossible - carry their babies. The women's breasts and bellies grow enormous with milk and animal babies while they are still being fucked repeatedly by the dogs and gorillas.

Included in this 3-Pack are the following stories:

Bred and Milked by Gorillas
My Dog Turned Me into a Puppy Farm
Caught! Breeding with the Neighbor's Dogs

From Caught! Breeding with the Neighbor’s Dogs
I was shocked. I didn’t understand how I could possibly be lactating. I’d heard of that sort of thing happening to women if their breasts were sucked regularly, but it just didn’t make sense. Fritz continued to suck on that same nipple and I could feel the milk coming out of me. Bitz clamped his mouth down on my other breast and for the next half hour or so, I laid on my back while the two huge dogs bit and sucked on my incredibly sensitive nipples. I could feel them both drinking the milk down that flowed out of each of my breasts.
The sensation of being sucked on by the two dogs sent tingles straight to my pussy and I spread my legs wide, just waiting to be filled with a massive dog cock. When the two dogs were done drinking my milk, they sat back and waited for me to roll over. I don’t know how I knew it, but it was almost as if I could hear them talking to me in my head. I could hear them tell me to get on my hands and knees for them.
When I got up I could feel the weight of my breasts dangling underneath me, as well as the weight of my belly. It had grown over the last month too. It almost looked like I had a basketball inside my stomach. I wasn’t worried though. Somehow, the changes my body was going through seemed perfectly natural. The huge lactating breasts and the round belly were comforting to me now. They made me feel like I had a purpose in life. And whenever I touched my big belly I heard a voice in my head telling me how wonderful it was that I was going to have little ones running around the house very soon.
From Bred and Milked by Gorillas
I screamed out in surprise as I felt the gorilla enter me and fill me up. I didn't know what I had been expecting because I was a virgin. I didn’t have anything to compare it to but he felt enormous. He fucked me like a crazed animal that hadn’t had sex in a long time and came very quickly. When he was done another gorilla immediately took his place and plowed right into me.
Then, one after the other, as each one came inside me the next one took his place. In my haze I noticed that more gorillas had entered the cave. All ten gorillas were surrounding me, waiting for their turn to fuck me. At one point I was turned over so that my ass was high in the air and more cocks entered me from that direction. I reached back and rubbed my clit while the gorilla train plowed into me and came over and over while I was being filled with gorilla cock and cum. When the last one was finally done I had massive amounts of cum inside me. It was running out of me and down my legs as I lay there on the hay.
I woke up the next day and was still surrounded by the gorillas. I tried to get up but they wouldn't let me. And they kept taking turns fucking me. All day long they surrounded me and watched me in fascination while they took turns.
This went on for days. I don’t know how many because I had no way of knowing and I had lost count of how many times it had gotten dark since I’d been there. They just kept fucking me and groping my body. Sometimes they even turned me over and crammed to their massive cocks into my asshole.