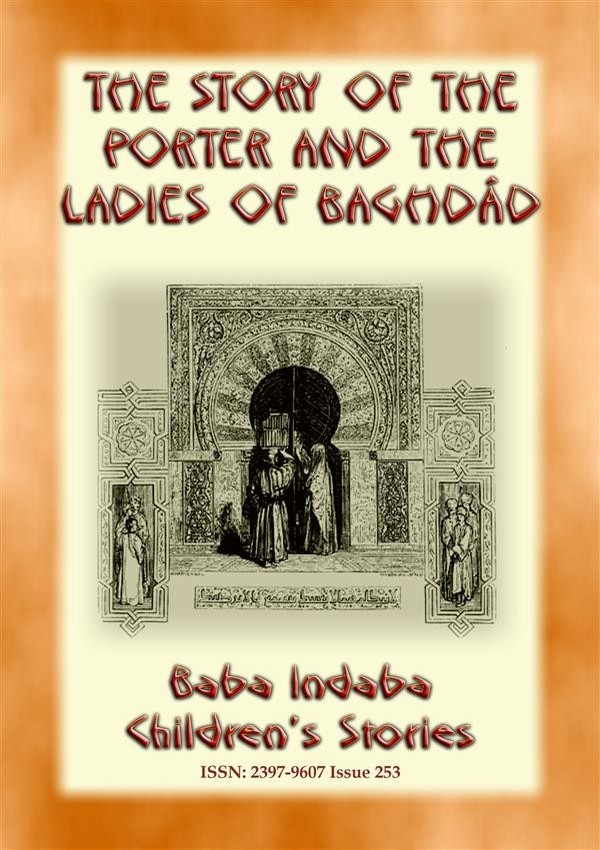 ISSN: 2397-9607 Issue 253
In this 253rd issue of the Baba Indaba’s Children's Stories series, Baba Indaba narrates “THE STORY OF THE PORTER and THE LADIES OF BAGHDAD”

Every day a porter took his place in Baghdad’s market, reclining against his crate, waiting for business. A female wrapped in an izár with gold-embroidered silk and a border of gold lace  ordered the porter to bring his crate and trolley and follow her. Thinking good fortune was smiling on him, he scrambles up and follows her around the market as she shops, filling his crate with supplies. Soon his crate is full and almost overflowing.

Then she bids him follow her home and they come to a well-appointed house. He follows her into the courtyard where she knocks upon a door. It is opened by the sister of the woman he has been serving. She orders he take it up to the kitchen. He sees a sumptuously furnished dwelling. beautifully constructed, with carved wood-work, and fountains, and benches of different kinds. He sees she is a third sister. He almost drops the crate when his eyes fall upon her beauty.

He is paid 2 pieces of gold, a veritable fortune for him, and given instructions to depart. He lingers and they think they have not paid him enough, but he is ogling them. However, they pay him another piece of gold. He is about to leave when there is a knock at the door and they are joined by three men, each with a patch over his left eye. The three strangers are entertained with food and drink and more witty conversation.

The evening continues and then some strange events take place. The men are not sure if what they see is really happening or if they are hallucinating after becoming intoxicated.

What were the stories which were told you may ask? Is what they saw and heard really real? And what became of the porter and the three beautiful women? Well, you’ll just have to download and read this story to find out – wont you?

Each issue in the Baba Indaba Children’s Books has a "WHERE IN THE WORLD - LOOK IT UP" section, where young readers are challenged to look up a place on a map somewhere in the world. The place, town or city is relevant to the story. All the places mentioned can be found using Google maps.
It is our hope that in looking up these place names using Google Maps, that young people will be able to see the images and read about other peoples and cultures from around the world. Through this, it is also our hope that young people will not only increase their understanding of world geography, but also increase their understanding and tolerance of other people and their cultures.