THE AXE, THE DRUM, THE BOWL, AND THE DIAMOND - A Fairy Tale 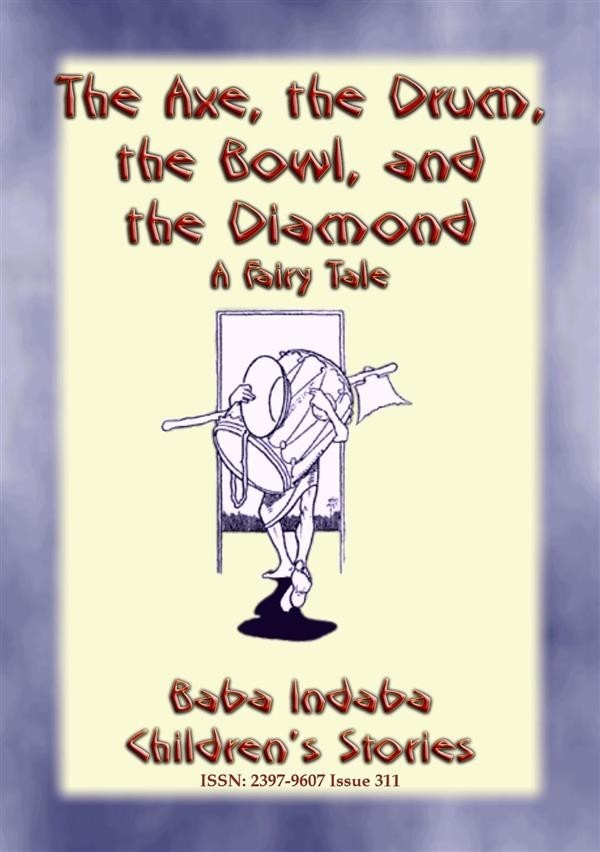 THE AXE, THE DRUM, THE BOWL, AND THE DIAMOND - A Fairy Tale

ONCE upon a time, a long, long ago and far, far away, there was a poor young man who went out into the world to seek his fortune. He went aboard a ship sailing across the ocean; and after they had sailed for a year and a day, suddenly a great storm arose. The rain descended, and the wind blew, and it blew so hard and so wild, that the ship went miles out of her course, and the skipper could not tell where they were. And then, in the middle of the night, a great crash came, and the ship was dashed upon a reef. The waves beat and battered it, and turned it topsy-turvy, and the end of it was that every soul was drowned except the poor young man.

The waves washed him ashore, more dead than alive, and on the shore he lay till next morning, when the sun warmed him and woke him up from his faint. He got up and looked about him, and wandered over the place, which he found was an island. It did not take him long to walk round it; and then he saw that it was a small island, and far as the eye could reach not another speck of land was to be seen. There were plenty of trees growing in the island, with fruit and flowers, bananas and cocoanuts, and springs of water; but on the trees were no birds, and no animals ran about on the ground. So he lived on the fruits and roots, and did the best he could.

One day, to his great surprise, he saw a black thing in the sky; and, still more surprising, the black thing had no wings. Yet it was flying, and flew nearer and nearer, until he saw that it was a large wild pig. How could a pig fly through the air? He rubbed his eyes and looked again; yes, a pig it was beyond all doubt; and it flew closer and closer until it came to the island.

Did the young man really see a flying pig? Once the pig landed, what did the young man do next? Did he manage to get off the island and where do the axe, the drum, the bowl, and the diamond come into the story? Well to find the answers to these questions, and others you may have, you will have to download and read this story to find out!

Baba Indaba is a fictitious Zulu storyteller who narrates children's stories from around the world. Baba Indaba translates as "Father of Stories".
Each issue also has a "WHERE IN THE WORLD - LOOK IT UP" section, where young readers are challenged to look up a place on a map somewhere in the world. The place, town or city is relevant to the story. HINT - use Google maps.