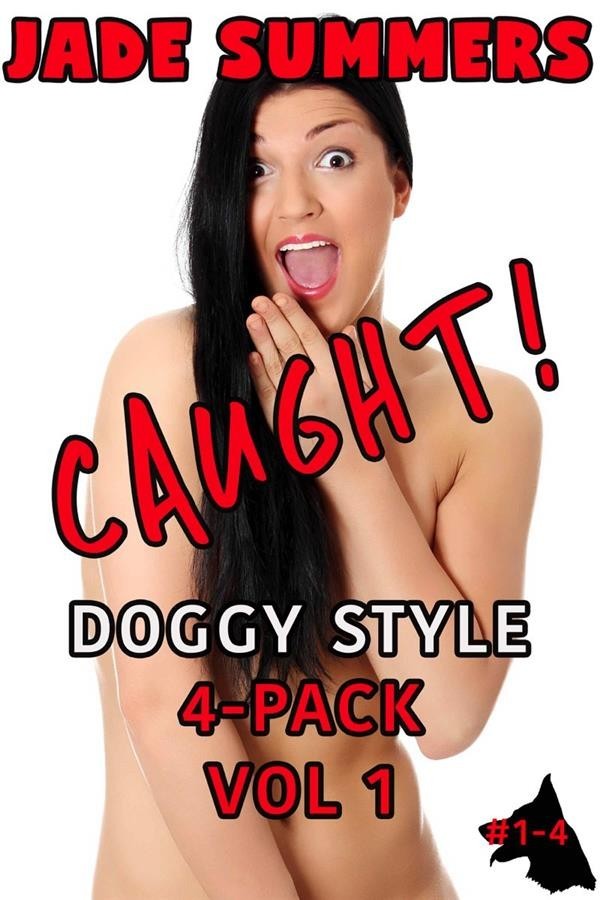 Four different women are completely humiliated when they are caught in the middle of getting it on with dogs! In the four different stories, the women are hypnotized by the beasts - some fucked in every hole, some knotted until the dog is finished, some bred and milked until they produce the dog's puppies, and some are fucked by a train of dogs and men. But all of them love every minute of it!

Books in this 4-pack include:

From Caught! Breeding with the Neighbor's Dogs:

I was shocked. I didn’t understand how I could possibly be lactating. I’d heard of that sort of thing happening to women if their breasts were sucked regularly, but it just didn’t make sense. Fritz continued to suck on that same nipple and I could feel the milk coming out of me. Bitz clamped his mouth down on my other breast and for the next half hour or so, I laid on my back while the two huge dogs bit and sucked on my incredibly sensitive nipples. I could feel them both drinking the milk down that flowed out of each of my breasts.
The sensation of being sucked on by the two dogs sent tingles straight to my pussy and I spread my legs wide, just waiting to be filled with a massive dog cock. When the two dogs were done drinking my milk, they sat back and waited for me to roll over. I don’t know how I knew it, but it was almost as if I could hear them talking to me in my head. I could hear them tell me to get on my hands and knees for them.
When I got up I could feel the weight of my breasts dangling underneath me, as well as the weight of my belly. It had grown over the last month too. It almost looked like I had a basketball inside my stomach. I wasn’t worried though. Somehow, the changes my body was going through seemed perfectly natural. The huge lactating breasts and the round belly were comforting to me now. They made me feel like I had a purpose in life. And whenever I touched my big belly I heard a voice in my head telling me how wonderful it was that I was going to have little ones running around the house very soon.

From Caught Knotted with My Boss’s Dog:

I cocked my head to one side while I continued to stare into Franklin’s black eyes. There was no one else around that could have spoken those words, and yet I heard them plain as day. Plus, I didn’t remember Mr. Banes ever referring to me by my first name, so I didn’t understand who could possibly have said that. I figured it had to have been in my head, but it didn’t feel like my own thoughts at all.
I’d like you to take your clothes off now
There was that voice again, and I didn’t see how it could be my own voice in my head. Then it struck me that the voice was coming from Franklin. And as I was coming to this realization I noticed that I had already removed all of my clothes. I didn’t even know I was taking them off, but suddenly, there I was, completely naked in Mr. Banes living room with his dog’s tongue exploring my stomach.
As I watched the massive tongue slither in and out of Franklin’s mouth, it made its way up to the hard nipples of one of my breasts. Franklin was so huge that he was able to keep all four feet on the ground and suck on my nipples without straining. And that’s just what he did. He clamped his little teeth down on one nipple and chewed on it for a while, then switched to the other, causing bolts of intense pleasure and pain to shoot through my body and down to my pussy.
When Franklin moved his massive muzzle down between my legs and slid his tongue in the crevice, I continued to play with my nipples—twisting and pinching them while I felt Franklin’s tongue move across my clit.
I heard the voice in my head again, and it told me to get down on all fours in front of him. I knew then that it was the dog’s voice. But how he was talking to me I had no idea—because, for one thing, he was a dog, and for another, his mouth wasn’t moving at all. I did what he said, though. I felt compelled to do whatever he told me to do—like the idea was suddenly the best one I’d ever had in my life. I got down on the floor with my ass facing Franklin, then reached around and spread myself for him. I didn’t know why but I really wanted to feel like I was offering myself up completely to him. I wanted him to see everything—my wet pussy and asshole—and to fuck them both.