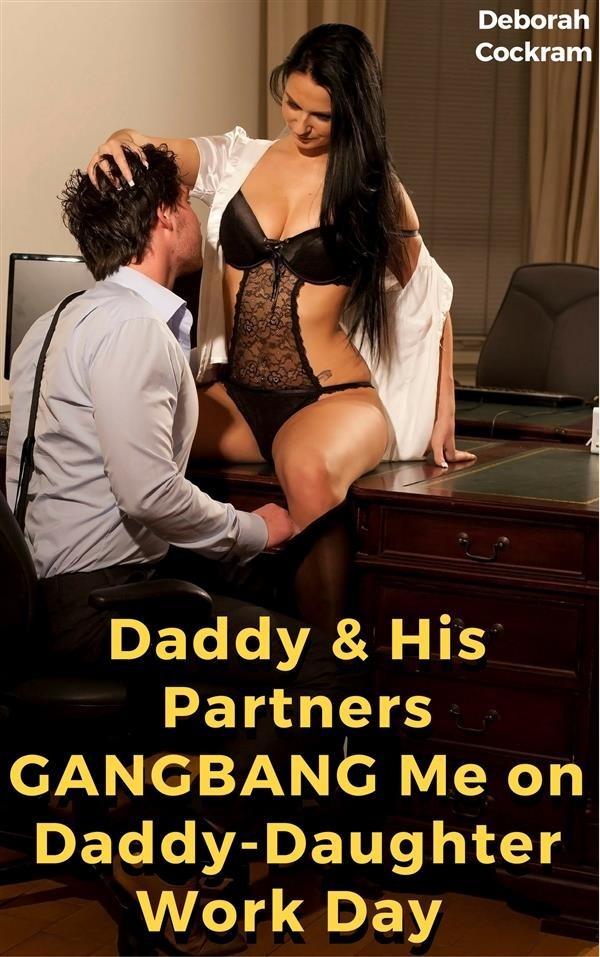 Fresh off of being stripped, spanked and pounded from behind by her precious Daddy during Daddy-Daughter Day at his job, Cindy finds herself sitting with her Daddy during a meeting with the company's partners.
Getting a chance to be exposed to how business REALLY works, Daddy said.
That's when Cindy learns what makes the business world go round is sex. Hard, GangBang Sex, when the partners strip her again and use her body as their sensual playground, taking her in every way possible, and Cindy discovers she loves every touch, every spank, everything they do, even when it comes time for her punishment for being such an eager, willing servant.
Here's a peek inside...

Cindy flinched and let a little gasp escape her mouth when she felt Marsha's foot rub against her leg. It wasn't an accidental touch, but a long, lingering caress, her foot – Marsha had allowed her shoe to fall off under the table – slipping along the inside of Cindy's calf, up to her knee.
They all stopped and turned to her.
"Everything okay, Cindy?" Daddy said. She thought she detected mild annoyance in his tone.
"N…I mean yes. Yes sir, Dad…Mr… I…" she wasn't sure what to say, even how to address him. "I just thought…"
"Thought you felt a breeze blow up your skirt?" Marsha said, her mouth a teasing smirk.
Cindy felt her breath catch in her throat when Marsha leaned over and patted her on the arm. Cindy felt what she could only think of as an electric charge shoot up her arm at the touch.
"It's okay," Cindy said. "I'm fine."
Daddy looked at her for several seconds, and Cindy shivered under his gaze.
"Stan," Marsha said.
"Yes, Marsha?"
"Is this one of your girls?"
Daddy looked at her, puzzlement across his face.
"Is Cindy here one of  your girls?"
"Marsha, she's my daughter, what do you  mea—"
"No," Marsha said, leaning over until her face was just inches from Cindy. "I mean is she one of your girls?"
Daddy sighed, then leaned back in his chair.
"As a matter of fact, as of about two hours ago, she is."
Marsha's face spread into a wide, toothy grin. "Good," she said, her voice suddenly deep. She leaned forward again, and pressed her lips against Cindy's.
"Come on, darling, this is what you're here for, isn't it?" Marsha reached up and put her hands behind Cindy's head. She pressed her mouth against Cindy's again, hard, moaning into Cindy's mouth.
Without warning Daddy was behind Cindy, pressed against the back of her chair, his fingers running through her hair.
"Relax, honey," he said, his voice even and soft now. Marsha broke the kiss, took her hands away from Cindy's head. Daddy pulled on her hair, not hard, but firmly enough so that Cindy tilted her head back.
"You want me again?" he asked...