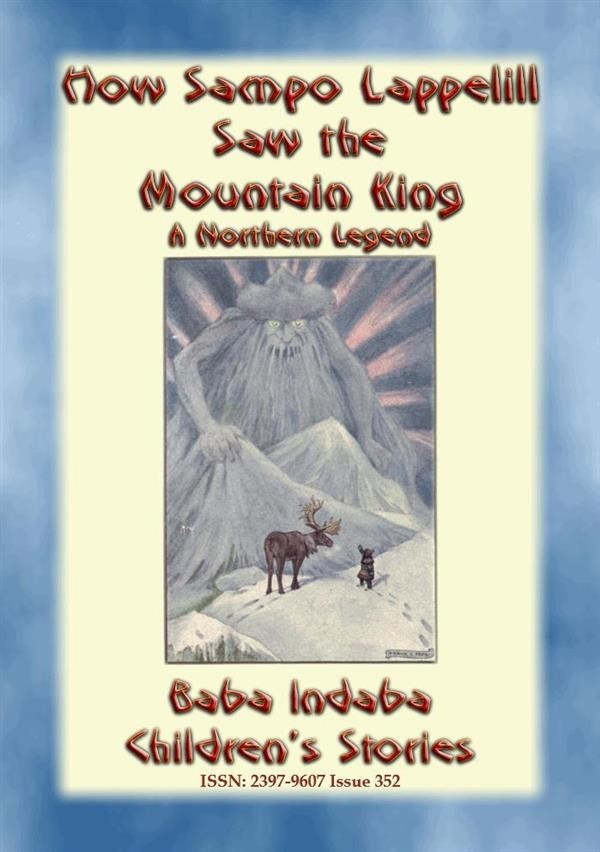 ONCE upon a time, long, long ago and far, far away, in Lapland, at a place called Aïmïo, near the River Jana, there lived, in a little hut, a Laplander and his wife, with their small son, Sampo. When Sampo Lappelill was about eight years of age he had black hair, brown eyes, a snub nose, and a wide mouth, which last is considered a mark of beauty in Lapland. Sampo was a strong child for his age; he delighted to dance down the hills in his little snow-shoes, and to drive his own reindeer in his own little sledge. The snow whirled about him as he passed through the deep drifts, until nothing of him could be seen except the tuft of his black forelock His mother worried about him when he was away from home driving his sled.
.
Sampo wondered about the local folklore but especially the one about the reindeer which had golden antlers. "It must be a splendid animal!" thought he; "how much I should like to drive to Rastekaïs with it!" Rastekaïs is a high, dreary mountain, and can be seen from Aïmïo, from which it is five or six miles distant.

Three or four weeks after Christmas, one day, at noon Sampo's father said: "Come here! I have something to show you." Sampo came out of the hut. His father pointed towards the south and told him that after the long winter, one day soon they would see the sun himself.
But Sampo was thinking what a grand sight the terrible Mountain King would be—from a distance of course. The boy brooded on this for the remainder of the day, and throughout half the night, when he should have been asleep.

He thought, and thought, until at length he crept silently out of the reindeer skins which formed his bed, and then through the door-hole. The cold was intense. Far above him the stars were shining, the snow scrunched beneath his feet. Sampo Lappelill was a brave boy, who did not fear the cold. He was, moreover, well wrapped up in fur. He stood gazing at the stars, considering what to do next and then thought, there’s no harm in going for a drive, so he hitched up the reindeer and off he went.

Did Sampo see the Sun himself and what about the Mountain King? Would the Mountain King openly welcome him into his court or would he be offended at Sampo’s presence? So, what happened next you ask…? Well many things happened, some silly and some serious. To find the answers to these questions, and others you may have, you will have to download and read this story to find out!