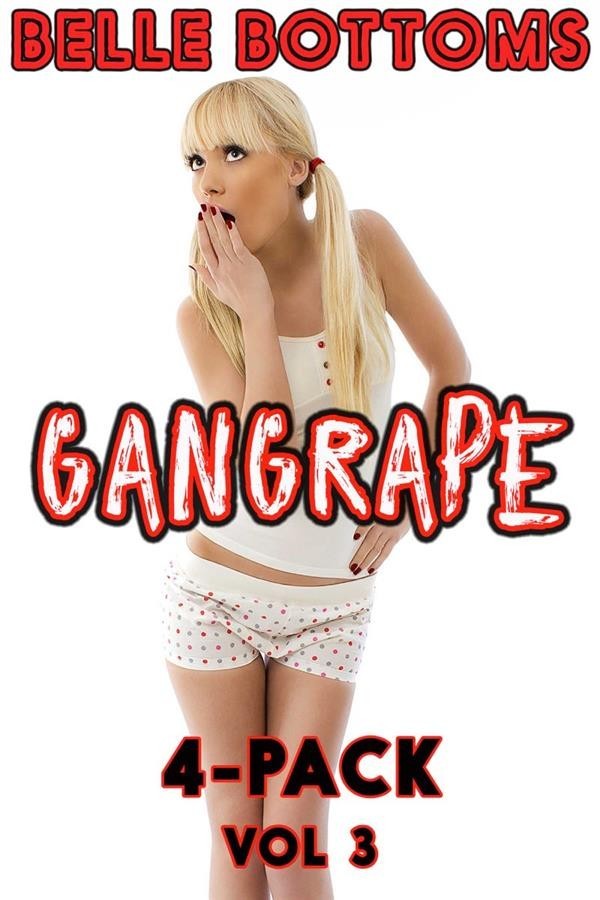 Four more stories about 4 women who find themselves surrounded by large groups of men who take what they want from them, fucking the women in every hole until they are completely satisfied.

This 4-Pack includes the following stories:

From Gang Raped in Prison:

“You need to remove everything, ma'am."
“But you can see I don’t have anything in here,” I said as I pulled at the strap of my bra.
“I don’t know. Those tits look a little too big to be true. Let’s see ‘em.”
The guard didn’t say anything else. He just crossed his arms and stared at me.
They both looked like they were really enjoying watching my total humiliation. I slowly took off my bra and threw it on the chair with the rest of my clothes, then pulled down my panties. Then I quickly covered my breasts up again. The guards both smiled while I tried to hide my large breasts when my hands only covered up a small part of each one.
“I guess you really weren’t hiding anything in there, were you,” one of them said with a laugh. "Come over here and stand in front of me.”
I did with the guard told me to do, then felt his hands on my hips as he turned me around so that my back was to him. “Bend over."
I didn't move. I was terrified. I knew what they were going to find and I was frozen in place.
“Bed over now, or you ain't getting in to see your man."
"I changed my mind. I don't need to go in and see him. I'll just—“
“You just settle down, now. You ain’t going nowhere. Now bend over."
I did what the cop told me to do. I bent over at the waist and felt my breasts hang down underneath me. Then I felt the guard’s hands rubbing circles over my ass cheeks. “We don’t usually get such nice looking ladies in here. Most of the time it’s ugly broads. But not you,” he said as he spread my ass cheeks apart. “You’re really something.” He poked my asshole with his finger, then slid it partway in.
“Ow! Hey! What are you doing?”
“We’re doing a cavity search. Just relax, this is required. We do it every day.” They were both laughing behind me now.
“But I’ve never had a search like this done before!”
“Well, those guards must not have been doing their jobs. We’re just keeping everyone safe,” the guard said with a chuckle.
I felt the guard’s finger push into me again and I tensed up all of my muscles.
“Just relax,” he said as he moved his finger in and out of my asshole. “See? Doesn’t that feel nice?”
I didn’t know what to say to him. I knew this wasn’t right, but there was nothing I could do about it. Eventually, the guard pulled his finger out of my asshole and his hands made their way down to my pussy lips. He pulled the lips apart with his thumbs so that I was completely exposed to the two men.