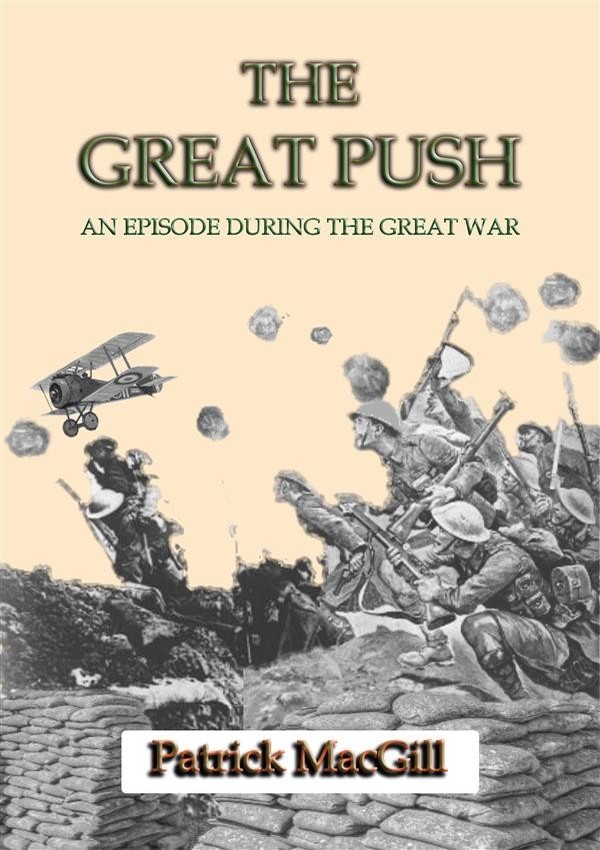 By 1915 the trenches of the Western Front were in different states of repair, including the captured trenches, which had all but been destroyed as a result of shell fire. The countryside and villages were a scene of utter devastation, nothing but mud and mounds of rubble where communities and fields of wheat had once stood.

The main battles during 1915 were Ypres, French Flanders, Artois, Aisne, Champagne and Vosges. During September and October 1915 an attack by French and British forces from Vimy Ridge to La Bassée, was called the Artois-Loos Offensive or the Third Battle of Artois.
This novella by Patrick MacGill, the 5th of 20, is based on his experiences in the trenches of Loos during this period, which resulted in arguably his best book on World War One. A classic of war literature, The Great Push could be considered autobiographical in nature and is nevertheless a passionate and compelling book which describes the fear, resilience, humour and fatalism of those who fought in the raw edge of one of the most terrifying wars ever to have been waged.

MacGill had somehow penned all but the last two chapters in the trenches of Loos before being wounded. He wrote the last two chapters while recovering in hospital in the latter part of 1915.
===============
Patrick MacGill 1889 – 1963, was an Irish journalist, poet and novelist, known as "The Navvy Poet" because he had worked as a navvy before he began writing. During the First World War, MacGill served with the London Irish Rifles (1/18th Battalion, The London Regiment) and was wounded at the Battle of Loos on 28 October 1915. He was recruited into Military Intelligence, and wrote for MI 7b between 1916 and the Armistice in 1918. During his lifetime he penned 20 novels, 5 volumes of poetry and 2 plays.