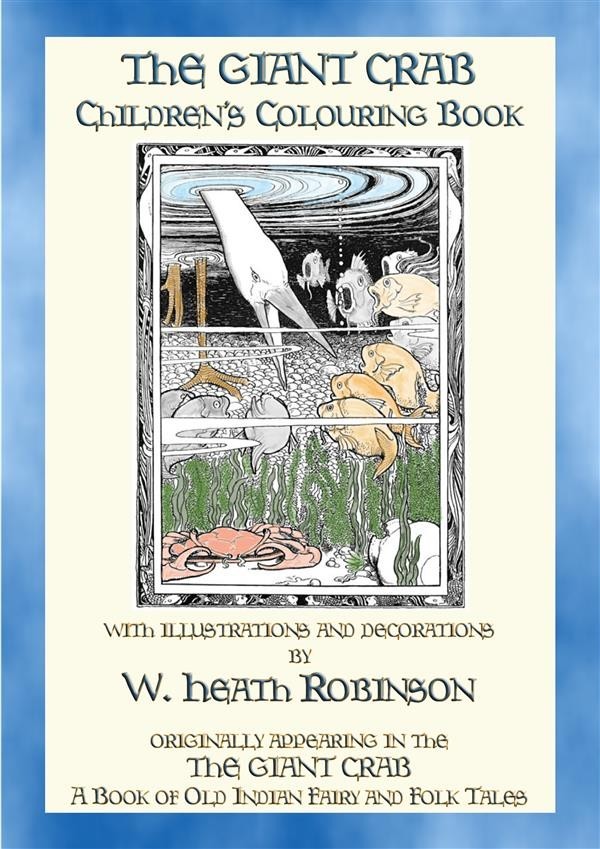 The purpose behind this book is not only to give children a lot of enjoyment by freely splashing colour on a page, but also to introduce them to one of the UK’s best known illustrators – W. Heath Robinson, who is more famous for his illustrations of elaborate machines than he is for illustrations of children’s books. Herein you will find 51 illustrations he made for the book of old Indian tales titled The Giant Crab.

Then, you may ask “Why is this an eBook and not a paperback?”
The answer is quite simple. Instead of colouring in a picture once and then throwing away the book when fully used, with this ebook you will be able to print off as many of the 51 images as you like, and as often as you like, ad infinitum.

In this book children are encouraged to fill in the white spaces on the 51 images. At the rear we have provided a few blank templates which children can use to create their own images which can be printed off time and again.

A few of the original images, now over 120 years old, were quite small when digitised resulting in blurred outlines when they were enlarged. Where this has occurred we have endeavoured to use just about every trick in the digital graphics book to retain the integrity of the outlines.

William Heath Robinson (31 May 1872 – 13 September 1944) was an English cartoonist and illustrator best known for drawings of ridiculously complicated machines designed for achieving simple objectives. Unfortunately, it is for his exquisite children’s illustrations, which feature in this book, that he is less well known.
In the UK, the term "Heath Robinson" entered the popular vernacular  during the 1914–1918 Great War as a description of any unnecessarily complex and implausible contrivance, much as "Rube Goldberg machines" came to be used in the US from the 1920s onwards as a term for similar designs.