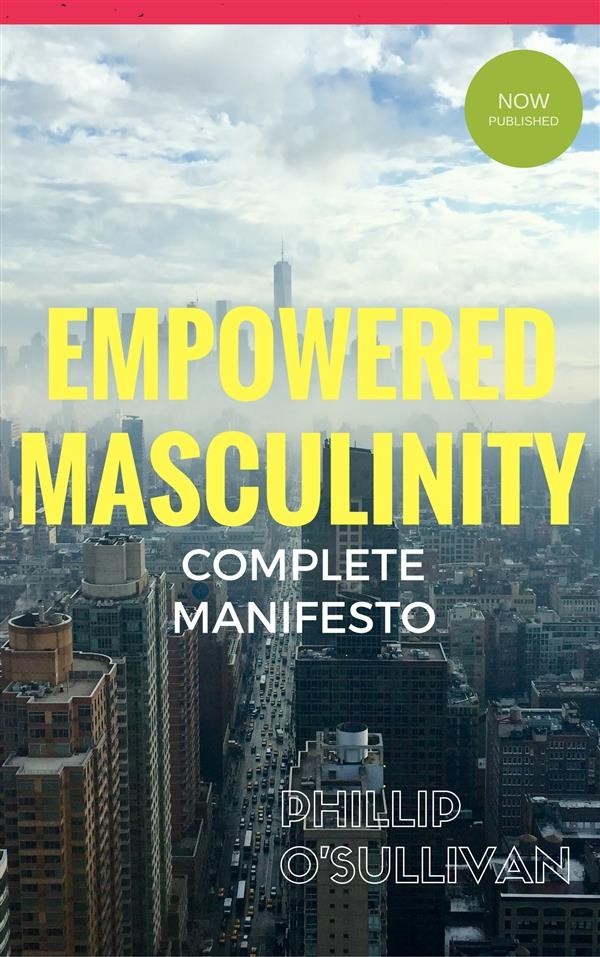 MASCULINE EMPOWERMENT- The Need for a Complete Mens Manifesto

Feminist ideology has always depended upon just three legs to a stool. Rape-War-and Money. These they have combined into an equation called 'oppression by patriarchal power'. Variously attacking men via one or other of these three channels.On that basis, they lay claim to what is supposed stems from that social calculation. This book shows they are wrong in all three cases.

In Phillip O'Sullivans 'EMPOWERED MASCULINITY: A Masculist Manifesto'- these three false accusations are methodically addressed for men in their historical, geopolitical, ideological and economic context.

-Women can literally rape men as is shown anthropologically in the famous'Tapioca'stage of the Kula cycle made famous by the London School of economics as 'shell money'. Rape too of men by women can also be seen on Googles Youtube channel if you but search for 'woman rapes man'. You will see more than one live filmed example of this. Suppressed too in the often quoted press released '1 in 4' argument of the Koss survey is a long buried result unearthed by Dr. Christina Hoff Sommers out of that survey giving a 'one in four'result for men also. In what strongly appears to be coercive sex without our consent. This is repeated in almost all modern scientifically independent recent studies as well.

-War: in logistics, it takes ten men in the supply chain to feed one man at the front with both food and ammunition. Men in war die as often in transport accidents because war is like a gigantic confused construction site in all weathers and unfamiliar conditions. Of the men at the front only around twenty percent of those men (just 2% of the whole) can bring themselves to aim, 'to kill' the enemy. Therefore the remaining 80% (just eight percent of the whole contingent-it makes me weep to consider this following) are more prepared to die than to kill the enemy. No greater love has any man than that he lays down his life for his buddies.
The strange case of Erin Pinney supporter of men and the original founder of what became women only refuges. She was booted out of feminism because she was not anti-male and sexist! Her concept was for shelters for both men and women. She was interested in victims; not using 'victims'merely as pawns in a falsified 'gender blaming war', against men. Weird how it is all coming out now isn't it? She was not the only one this happened to.


-Money: Women live way longer than men; there are therefore more of them (this matters in a democracy) and live to vote up to two more elections than men (around an 8% advantage- twice the four percent needed to 'swing' any closely matched election)- thus making Democracy- really 'Women's Government'-and male politicians know this. Albeit only 17 percent of women now believe in feminism. Women still win big in the power stakes. For they inherit wealth from older husbands. Outliving them long enough to score big on receipts of pension monies as well.Taking over 70% of all pension payouts.Women also score largely on the general health vote and on the education front as well. Also in family assistance and other forms of payouts and benefits more than men; many only available to women. In jobs, women gain from quota systems and other privileges and preferments. Men do the industrially dirty jobs and may be paid more for this. Sometimes too under adverse conditions or in remote or difficult locations etc- this attracts more pay as encouragement. The real terms of pay are more like $1.70 to a man's $1 than the obviously erroneous '77 cents'slogan so cheaply touted about. Especially when everything in the overall picture of life comparison is contemplated.

But Oh! I forgot 'binary oppositions', like revealing comparisons, are not allowed or tolerated in the feminist canon of politically correct speech.