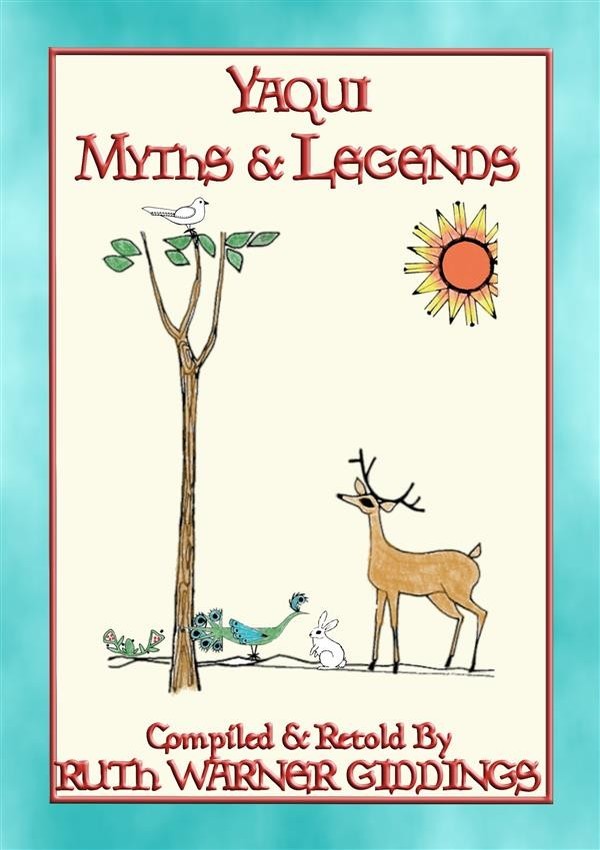 AS LATE AS the 1950’s no thorough collection or study has been made of Yaqui folklore. At this time only about a score of Yaqui stories were to be found in published form. The 61 Yaqui folk and fairy tales and 90 pen and ink drawings in this comprehensive volume go quite a way to correcting this.
HEREIN you will find stories like Yomumuli And The Little Surem People, The Ku Bird, The Wise Deer, Tasi'o Sewa, Yuku, When Badger Named The Sun, Mochomo, The Walking Stone, The Stick That Sang, Cho'oko Baso plus many more.
YAQUI FOLK literature also expresses the tribe's sense of the sacred and material value of their territory, and the antiquity and distinctiveness of their customs. As such, you will also find stories of War Between The Yaquis And The Pimas and The Wars Against The Mexicans. For most of the 19th C. the Mexican government baited the Yaquis, captured and sold them off as indentured workers then confiscated their land and moved settlers in. But the Yaquis fought back. There is also the story of the Peace At Pitahaya which was signed in 1909.
STORY TELLING among the Yaquis is quite informal. There is no socially determined time or place for relating the myths or tales except in the case of pascola stories, which are told at fiestas. Nor are there special persons who are supposed to tell the myths or tales. Yaquis say that stories are most often told, by men or women, in the evenings when a group happens to be gathered in the ramada or in the house by the fire. They also tell stories when working in the fields. However, some of the older Yaquis indicate that story-telling used to be more formalised in the time of their parents or in their own youth. The more the pity as there is no better way of keeping a culture alive than through story telling.
WE INVITE YOU to curl up in front of your hearth with the fire crackling and spitting. Then open this this unique sliver of Yaqui culture not seen in print for many a year; and immerse yourself in the tales and fables of the ancient American South West.
----------------------------
TAGS: fairy tales, folklore, myths, legends, children’s stories, children’s stories, bygone era, fairydom, fairy land, classic stories, children’s bedtime stories, fables, cultural, setting, Arizona, Mexico, South Western USA, storytelling, narrators, yomumuli, little surem people, ku bird, wise deer, tasi'o sewa, yuku, badger, named the sun, mochomo, wax monkey, false beggar, stick that sang, two bears, walking stone, sun, moon, five friends, takochai, man, buzzard, snake people, omteme, juan sin miedo, boy, became king, kaiman, big bird, wars against the Mexicans, war between the yaquis and the pimas, peace at pitahaya, malinero'okai, first, deer hunter, death, kutam tawi, flood, prophets, san pedro, cristo, Saint Peter, Jesus Christ, jesucristo, pedro de ordimales, san pedro and the devil, father frog, two little lambs, maisoka, hima'awikia, cricket, lion, grasshopper and cricket, turtle, coyote, rabbit, heron and fox, cat, monkey, rabbit's house, coyote, friendly dogs, black horse, duck hunter, tesak pascola,  watermelons, calabazas, funeral, suawaka, topol the clever, remain animals, coyote woman, first fiesta, bobok, five mended brothers, 5, first fire, spirit fox, 2, yaqui doctor, twins, snake of the hill of nohme, tukawiru, cho'oko baso