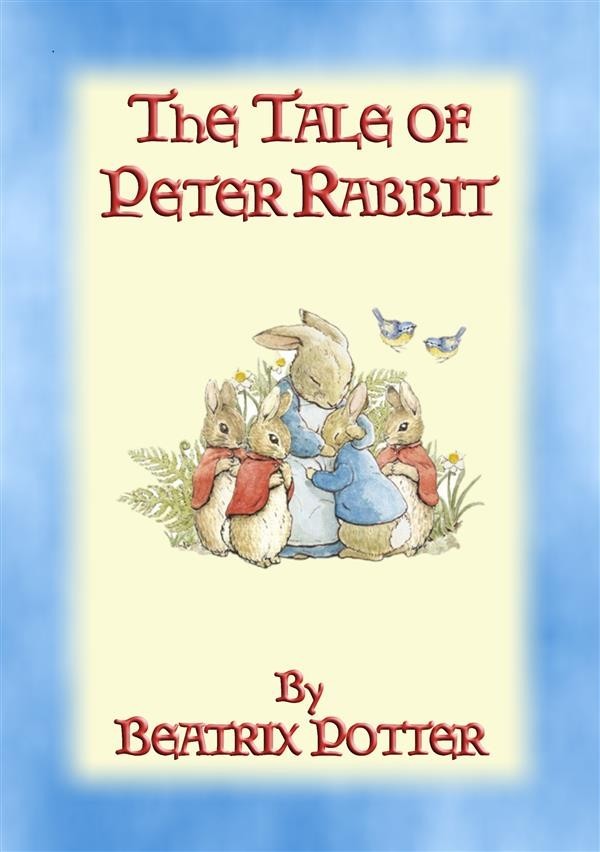 The Tale of Peter Rabbit, written and superbly illustrated by Beatrix Potter. It follows a mischievous and disobedient young Peter Rabbit as he is chased about the garden of Mr. McGregor after eating vegetables he wasn’t supposed to. After a few tight scrapes he escapes but loses his shoes and jacket in his scramble for freedom. He returns home to his mother, who puts him to bed after giving him some camomile tea.

The tale was written and exquisitely illustrated by Potter for five-year-old Noel Moore, son of Potter's former governess Annie Carter Moore, in 1893. It was revised and privately printed by Potter in 1901, but was printed in a trade edition by Frederick Warne & Co. in 1902. The book was a success, and multiple reprints were issued in the years immediately following its debut. It has been translated into 36 languages, and with 45 million copies sold it is one of the best-selling books of all time.
-------------------
Helen Beatrix Potter was an English writer, illustrator, natural scientist, and conservationist best known for her children's books featuring animals, such as those in The Tale of Peter Rabbit.
Born into a privileged household, Potter was educated by governesses and grew up isolated from other children. She had numerous pets and spent holidays in Scotland and the Lake District, developing a love of landscape, flora, and fauna, all of which she closely observed and painted.
Though Potter was typical of women of her generation in having limited opportunities for higher education, her study and watercolours of fungi led to her being widely respected in the field of mycology. In her thirties, Potter self-published the highly successful children's book, The Tale of Peter Rabbit. Potter began writing and illustrating children's books full-time.
In all Potter wrote about 30 books; the best known being her 23 children's tales. With the proceeds from the books and a legacy from an aunt, in 1905 Potter bought Hill Top Farm in Near Sawrey, a village in the Lake District.
She died of pneumonia and heart disease on 22 December 1943 at her home in Near Sawrey at the age of 77, leaving almost all her property to the National Trust. She is credited with preserving much of the land that now constitutes the Lake District National Park. Potter's books continue to sell throughout the world in many languages with her stories being retold in song, film, ballet, and animation, and her life depicted in a feature film and television film.
---------------------
Keywords: Peter Rabbit, Beatrix Potter, children’s stories, lake district, England, bedtime stories, mischievous, animals, Flopsy, Mopsy, Peter, Cotton-tail, Mr McGregor, Mrs. Rabbit, blackberries, naughty, French beans, radish, parsley, cucumber, 'Stop thief, run, fast, watering can, cabbages, robins, lost, sneeze, jump, dash, vegetable garden, cat, fish, outside, free, home, hoe, gate, scarecrow, camomile tea, bread, milk, blackberries, sleep