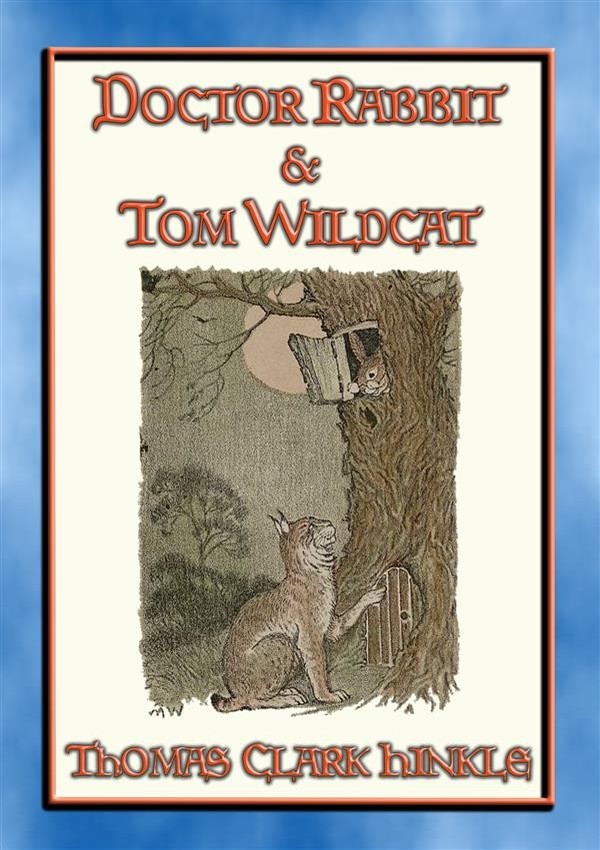 “Doctor Rabbit and Tom Wildcat”, written by Thomas Clark Hinkle (1876-1949) is an illustrated children’s story in the style of Beatrix Potter’s “Peter Rabbit and Friends” series.
In the middle of the night, Tom Wildcat knocks on Doctor Rabbit’s door. Grumbling he wakes up and opens his window to see who it is. He is not pleased to see Tom Wildcat and less keener to open his, fearful of the consequences. Nevertheless he treats Tom Wildcat.
But that isn’t the end of Doctor Rabbit’s dealings with Tom Wildcat. He overhears Tom say he is planning to catch and eat his friend, the innocent Jack Rabbit. But what could he do about it?
He sat in his rocking chair and thought and thought until he had come up with a plan.
When he was sure the “coast was clear” he snuck out and began to make his way to where Jack Rabbit took his naps. But did he get there in time to warn him?
And what of his other patients? What is wrong with O Possum and what secret did Tom Wildcat discover?
So sit back with a steamy beverage and be prepared to be entertained for many-an-hour with this forgotten children’s story. If and when you come to pick up the story where you left it, don’t be surprised if you find a younger reader is now engrossed in the book and is reluctant to let it go.
10% of the net sale will be donated to charities by the publisher.
==============
KEYWORDS/TAGS: fairy tales, folklore, myths, legends, children’s stories, childrens stories, bygone era, fairydom, ethereal, fairy land, classic stories, children’s bedtime stories, happy place, happiness, Hare, Run Away, , Rabbit, Tom, Doctor, Wildcat, little, Stubby, time, Jack, tree, hole, Possum, Woodchuck, Jay, Blue, pretty, big, Woods, Green, good, old, Big, creatures, house, foot, Chatty, Cheepy, laugh, medicine, salve, Mandy, Squirrel, Rabbit, window, Kit, fast, frighten, Chipmunk, chicken, wildcat, afraid, tom, hoppity, rid, bad, Possum’s, poisoned, Friend, Red, cunning, cholera, Farmer, Jenny, Roe, paint, Deep, Robin-the-Red, neighbor, neighbour, breakfast, Prairie, stomach, growled, Sophy, Cat, sycamore, squeeze, Brook, tablespoon, adventure, Brother, woodrat, hollow, escape, garden, mouse, Crow, mysterious, discover, squawk, barnyard