The Sayings of the Great Forty Days 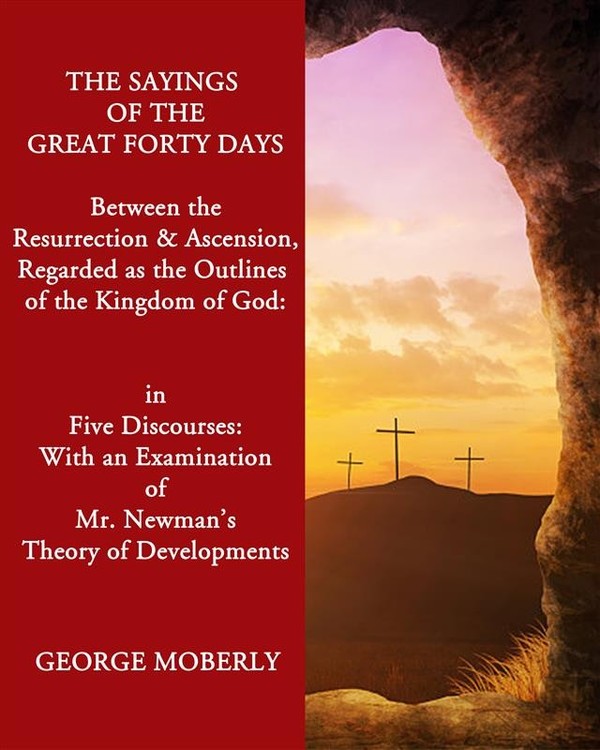 The Sayings of the Great Forty Days

The alterations which have been made in this Edition have been principally expansions and enlargements of the argument, which had before been more shortly and summarily stated. These I must leave to speak for themselves; only expressing my regret that still they are more summary than I could wish them. But the greatness of the subject, and my own continual and pressing occupations, have made it impossible for me to take so wide a range of argument and illustration as the subject admits, and perhaps requires.
In one point I have made an alteration of arrangement; for whereas in the former Edition I had placed the Pastoral Commission before the Commissions to baptize and to absolve, on the ground of its appearing to be a larger and vaguer Commission, capable of being, as it were, divided, or regarded more particularly in the other Commissions, I have now placed it after those Commissions. This has been done partly because the solemnity with which the other two Commissions were given appears to put them into a more eminent and important rank than the Pastoral; and partly because the Pastoral having been given, although to all the Apostles in design, yet to one only in word, I was unwilling to write or print any thing which might, even mistakenly, lead to the impression of my wishing to support that doctrine which I cannot but regard as the source of corruption in the Church, the true cause and provocative of all the manifold schisms of later years, the πρῶτον ψεῦδος of debased Christianity, the doctrine of the supremacy of the Pope, or the absolute need of submission to him in order to membership of the Church of Christ, and his consequent infallibility in matters of doctrine.
This impression, which I would never have incurred willingly, it has now become most important to render impossible. And I therefore trust that I may not be doing what is faulty, in point either of taste or duty, in expressing my deep conviction of the soundness of the ground taken by the Church in England as against the See of Rome. The equality of the Apostles, which is capable of the most abundant proof, seems to lead directly to the equality of Bishops, and of Churches. Nor is it easy to conceive that what was a real and acknowledged equality in the primitive ages, can have become a legitimate and due dominion in later ones. When this claim of dominion is found to involve an actual denial of the full Episcopal power to all Bishops throughout Christendom, except the single holder of the See of St. Peter, from whom all other Bishops are thought to hold only a delegated and vicarious authority; when this claim of dominion is used to substantiate and accredit a body of doctrine widely dissimilar from what the Holy Scriptures teach, and the writings of the primitive Fathers exhibit as believed in their times, it becomes a matter of the very first and most momentous consequence to ascertain whether that claim itself is well-founded, or whether, in fact, it be an usurpation, and therefore to be resisted by those who tender the true constitution of the Church of Christ, and the integrity of the Faith once delivered to the Saints. It is no longer then a question of peace, or of a meek spirit which can yield itself even to illegitimate claims of superiority; but it is a real, vital question. The Pope is not an individual whom for honour’s sake, or for the sake of the antiquity or apostolicity of his See, we may inoffensively, and without evil consequence, regard with even more respect and submission than is his due; but he is the claimant of an universal monarchy, the very symbol of a theory of Church government unheard of for many centuries of the Church’s existence; the representative and enforcer of a system of doctrine, uniform in spirit, but very various in details, which, be it true or be it false, is very far from identical with the system of doctrine of the Holy Scriptures.