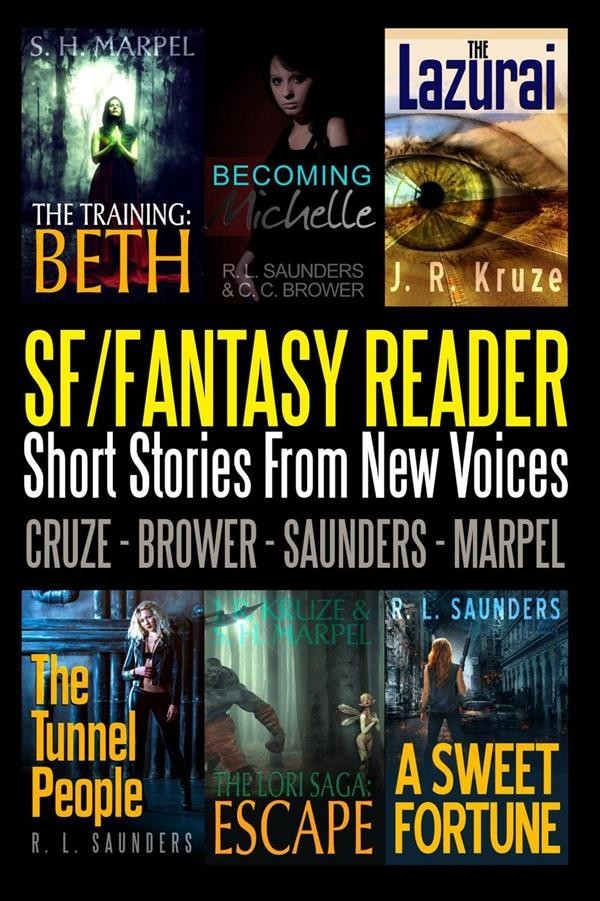 New voices bring new ideas and new worlds to you in these six short stories of Science Fiction/Fantasy.
That's what they are good at. Figuring out things that are completely different from the same old repeating plots and characters. Finding new "what if's" that have never been asked before.
Whether you like dystopian stories of what happens after the world ends, or the sudden appearance of fairy tale creatures in our current worlds, you'll find a lot to keep you fascinated by these new authors.
As well, you may find a bit of fine satire and hidden social commentary, something both genres have always been good at.
Regardless, these short reads will fit into your busy schedule - about a week of good entertainment for the odd hours and minutes.
A Short Story Anthology Containing:
- The Training: Beth by S. H. Marpel
- The Lori Saga: Escape by J. R. Kruze & S. H. Marpel
- The Tunnel People by R. L. Saunders
- Becoming Michelle by R. L. Saunders & C. C. Brower
- A Sweet Fortune by R. L. Saunders
- The Lazurai by J. R. Kruze
Excerpt:
(From "The Training: Beth")
SHE WAS RUNNING TOWARD me, just as I hoped for. Of course, I couldn't move to get out of her way, not with that busted leg the troll had just given me.
And I don't know if she could see him like I could, but that troll was right behind her - and gaining.
So I did the only thing I could - I made her trip. And she landed right next to me, in the soft ferns and leaves. Not that it helped her landing too much.
She groaned at her landing, then rolled over to get back to her feet. That's when she saw me. Laying there. Eye to eye with her. Of course I was only three feet tall and had pointed ears, so it was a bit of a shock.
I put my finger on her lips and pointed over her shoulder.
There was the troll. All nine ugly feet of him, carrying a huge stick made out of a tree stump root ball. He'd beaten most of the dirt out of it, as well as most of the roots that stuck out. But it was scary nonetheless.
He seemed to have lost where she went. But right as I thought that, he sniffed the air and turned in our direction. And saw us both. Then Mr. Troll started stalking toward us, an evil grin on his face.
My only move was a desperate one. I grabbed her hand and pointed it to the troll. Nothing happened at first, but then the troll appeared to slow down, and just as slowly, he got perplexed about why he couldn't move at his normal speed.
"Thought so." I said to this human. "You've got talents you didn't even suspect. Here - this might seem strange to you, but imagine that troll as a cloud of smoke."
But nothing happened. He was still moving toward us like a glacier, but still would be here sooner than we could get out of his way.
"OK, try not to think of a pink elephant." And poof, the troll now had big pink floppy ears and a long pink nose. But he still held that huge stick in his hand, still moving slowly toward us.
"Now - think of him as a cloud of smoke." And the troll was just a cloud. The stick also disappeared. "Next, make the wind disperse him into the clouds." And a gust of wind dissipated that cloud into nothing.
At that, she looked back at me - and fainted.
But I looked her over and saw she looked just fine. A very cute fine...
Scroll Up and Get Your Copy Now.