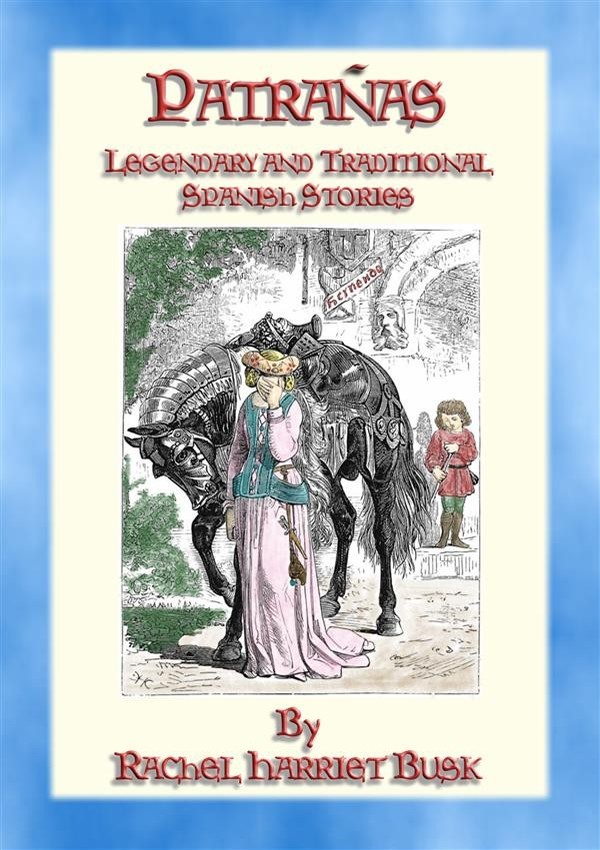 The literal translation of “Patrañas” is humbug or nonsense. When used in the context of folklore and legends it can be taken to mean tall stories
In seeking inspiration to create a book, in essence a story, it is seldom found in one item or a single occurrence, but more often when a number of these coalesce into a climax of sorts, resulting in a “Eureka moment”. And so it was with the creation of this volume of 50 illustrated Spanish Traditions.
It all happened thus……In the course of one of her rambles through Spain in the late 1800’s, it happened one day that the compiler, Miss Rachel Busk, was tempted by an old longing to visit one of the most out-of-the-way and primitive villages in the region. She made her way with a young companion to a place called Guadaxox (pronounced Guadaquoth.)
They were so enjoying the brightness of the day that they failed to notice how the time passed, nor how the wind from the mountains had covered the fair sky with angry clouds. It was only when the first great drops of the storm patted them on their shoulders that they realised the extent of their situation.
They sought shelter for the night in the only venta, or inn, in the area. To state the place wanted for every comfort was an understatement. Expected to sleep in a communal area, much like the caravanserais on the Silk Road, their number was soon added to by a couple of rough carters. The lady of the house took pity and beckoned her to her room. Her daughter had gone with friends to another village for a few days, so her bed was free. However, Ms Busk and the old lady sat up talking the night away. In the main they talked about the customs and legends of the people, a matter in which the old lady was well versed, and which had always had a special charm for Ms Busk. The old lady was delighted to have someone who would listen to her “long yarn;” and Ms Busk was delighted to have found a source at which to satisfy some of my curiosity about Spanish Traditions. And so this volume of no less than 50 illustrated Spanish Traditions and stories was born……
Because the stories in this volume have not yet become mainstream, they are sure to pique your interest. Because the stories are so fresh, this volume is sure to keep you and your young ones enchanted for hours, if not because of the quantity of the stories, then for their quality. They will have you coming back for more time and again.
============
KEYWORDS/TAGS: fairy tales, folklore, myths, legends, children’s stories, childrens stories, bygone era, fairydom, fairy kingdom, ethereal, fairy land, classic stories, bedtime stories, happy place, happiness, laughter, Carlo Magno, Giant, El Conde Sol , Simple Johnny, Spell-Bound Princesses, prince, king, queen, Turian And Floreta, Blood-Stain, Alcázar Of Seville, Action, Adventures, Doña Josefa Ramirez Y Marmolejo, Steeple Of Covena, Fair Maid, Zaragoza, Juanita The Bald, Daughter, Love, Starving John, Doctor, Ramon, Discontented, Ballad Maker, Boot Maker, El Clavel, carnation, Ill-Tempered, Hermit, Fig Tree, Too Clever By Half, Wind, Ana, Sunbeam, Pedro Jimenez, Grape, St. Martin In Spain, Marvellous Stories, St. Michael’s Feather, Eyes To The Blind, Floating Chest, Whale Of The Manzanáres, Sun Of Wittenburg, Merino, King Vamba, Dona Terea, Teresa, Irish Princess, El Conde Fernan Gonzalez, First, Tunny Fishing, One Can Dine, Two Can Dine, Caballeresco, Hormesinda, Filial Love, Raguel, Jewess Of Toledo, Don Jaime De Aragon, Don Alonso De Aguilar, Black Charger, Hernando, Infante Don Henrique, Lions, Blanca, Haughty, Moresque, Moorish, Remnants, Issy-Ben-Aran, Móstafa Alvilá, Emir, Search, Eye, Yussuf, Sultana Perfumer-In-Chief, El Moro Santon, De Ultramar, Hernan Cortes, Sanctuary, Araucania, Indomitable, Tegualda, Fiton, Cave